Weekend Miscelleany - Fruity Pebbles in the Wine, Il Mare Chicago-Style, and How I Stopped Worrying About Giant Pandas

Why I will never be an wine expert

The new Business Week, which has the misfortune to be running a cover on Bill Gate's philanthropy just days after the even bigger story of his retirement from Microsoft broke, introduces Robert Parker, its new wine columnist (a business magazine without a wine critic is a little more than a rag ), which includes this description of a $150 French Rose:

"Vivid strawberry, raspberry, and berry fruit with hints of smoke, crushed rocks, and a touch of rhubarb." A competing critic was sure she picked up the scent of granite, but Parker is holding firm for an impudent sandstone.

Chicago on Film: The Lake House

Saw the new Sandra Bullock/Keanu Reeves film, The Lake House, which takes the architecture of Chicago as its fundamental mise en scene. The use of dozens of different locations is nothing less than splendid, with even transitional voiceovers placed over handsomely composed shots of some of city's most prominent buildings.

The film's shortfall is not so much the highly intricate plot involving Bullock and Reeves sustaining a relationship even as one of them is living in 2004, the other in 2006. (Did they set their timezone to Bermuda Triangle?) It's that for much of the film's first half, the lead characters seem to be speaking more in plot points than in any kind of recognizably human dialogue, and the action seems more about keeping things moving along than arising out of any organic motivation. As the film progresses beyond the setup, however, you begin to settle into the sometimes overlabored idiom, and the picture begins to gain a real emotional heft. It falls short of being the truly great film it might have become, but it still remains an affectingly poetic meditation on the themes of longing, loneliness and loss. Oh, and Chicago looks great in it.

So you say you're always worrying about the Giant Panda. How anything that huggable could actually be facing extinction? How every time you see one of those adorable, doe-eyed faces, you can think of nothing else but throwing away your boring, empty life just to be able to have one of those cuddly furballs munching bamboo directly from your hand? And what's 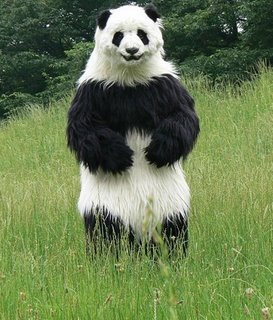 with the whole breeding thing? The whole world loves them -why can't they love each other, just a bit more often, know what I mean - wink, wink, nudge, nudge? Are these the questions that keep you pacing the floor in the middle of the night, bunky?

Well, lift up your spirits! Worry no more! Courtesy of Engadget.com we bring you news of the amazing Giant Panda robots, complete with 14 servo motors to create the full range of "realistic panda expressions." You'll be asking yourself: is it Ling-Ling, or Hirsute Mechanicals International? . See the pictures of the pandabots, and if you read Japanese, drop me a note about what they're saying about them.