Five years ago, within the Chicago city limits, Helmut Jahn couldn't get a doghouse built. He may have been creating landmark works all across Europe and Asia, but in his home town, he remained a prophet without honor. Then came State Street Village, the stunning dorm complex he designed for the IIT campus, which opened in 2003. Last year, 600 North Fairbanks, his first condo highrise in Chicago was announced, and it's now begun to rise on its Streetville site, just south of the Schatz Building, which in the 1930's through 1960, was home to the fabled Chez Paree night club. 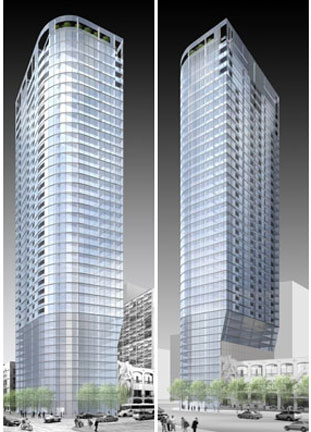 For the $100,000,000 600 North Fairbank's developers, Urban R2 Developent and Schatz Development, the architect has come up with a classic Jahn design: a sleek, curtain-walled 41 story, 451-foot-high tower, where the condos are placed over a lobby and 11 floors of parking that progressively cantilever, story-by-story, up to the larger floorplate of the residential portion of the building.

What's also interesting is how prominently Jahn figures in the marketing. The website features several videos of the architect talking about the project, as well as a mini-portfolio of his other buildings. At the construction site, there's another interesting sea change. Usually, on those big billboards listing the credits, the name of the architect is fairly inconspicuous, buried amidst the names of contractor and subcontractors. In contrast, the street signage at 600 North Fairbanks puts the Jahn name front and center. In some ways, it's just a case of Chicago catching up with New York, where the involvement of high profile architects such as Richard Meier has been used to help move units with multi-million dollar price tags. At 600 North Fairbanks, the signage heralds not just Jahn, but what it calls "pure modern vision." 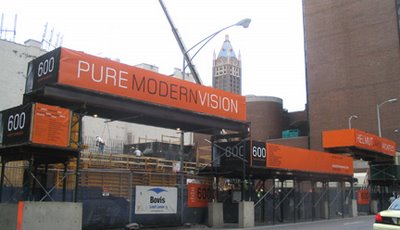 Is cheesy historicism's stranglehold on architectural design in Chicago finally about to be broken?

Going, going, but not gone...the condos went under contract in record-breaking time, but there are still units left. Go to the website at www.600northfairbanks.com - one of the coolest sales centers, too -very mondrian meets philippe starke

Yes, not much inventory left but worth checking out. They still had some prime units on high floors and the standard finishes are unlike any I've seen. A great value for truly unique floor plans in a cutting-edge building.