Fewer Spaces in Paradise (unless you're a car) 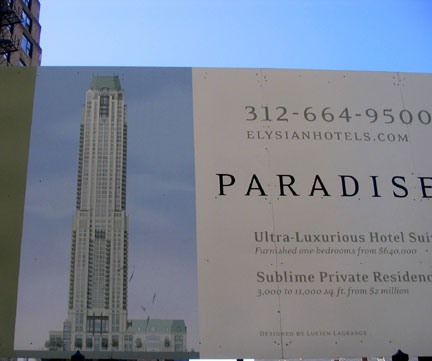 The ultra-luxury, 700-foot-tall Elysian, Lucien LaGrange's latest contribution to the Masked Ball school of architecture, seems to be getting rid of the riff-raff. A year ago, the developer was claiming to have signed contracts for 95 of the 183 hotel/condos, intended to be in-town apartments or rented out when the owner was away. The project also included 51 private residences, priced $2,500,000 and up.

This Thursday, First Elysian Properties is coming before the Chicago Plan Commission asking approval for decreasing the number of units down to 144, while increasing the building's FAR from 18.73 to 21.68 and upping the number of parking spaces by 50%, to 188. Could this be a sign that the supply of millionaire buyers is finally getting depleted, or has the market proved soft for the hotel suites? I'd like to think it's a reaction against retro design (the Elysian even includes a French-Empire-styled "carriage court") in favor of projects like SOM's Trump Tower and Santiago Calatrava's Fordham Spire, but that's probably too much to ask.

The site has been vacant and inactive since last summer, when the Lo-Cal Zone, the concrete shack, in comparison to its replacement a bastion of architectural integrity, was demolished. 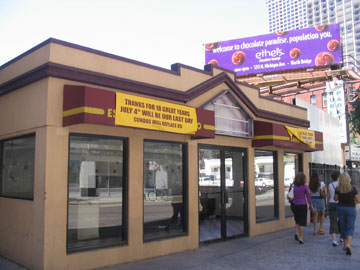