An email on Sunday from architectural historian Susan Solomon, who has been working to 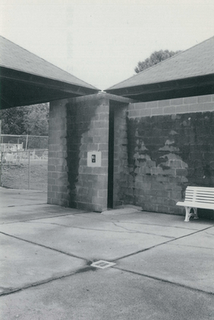 save Louis Kahn's 1955 Trenton Bath House, a set of four interlocking, pyramid roofed pavilions, reports an emerging deal in which Mercer County will purchase the 44 acre wooded site that includes the Bath House for use as a new senior center, and preserve the Kahn structures, which are listed on the National Register of Historic Places. According to a report in the Trenton Times, the county continues to negotiate with two separate property owners who split ownership of the site, with a formal agreement still to be reached. Solomon and Friends of the Trenton Bathhouse continue to lobby on behalf of the purchase.

In Chicago, things may also be looking up for the historic Cook County Hospital, famous nationally for doubling as the exterior of the hospital featured in the long-running NBC television series ER. Ever since operations moved to a new 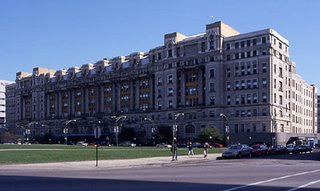 Stroger Hospital in 2002, Cook County Board President John Stroger appeared adamant on razing the 1914 building. The county's original convoluted plans called for replacing the park in front of the old structure with major new construction, demolishing the 1914 building, and creating a new park on the cleared site.

Stroger's unyielding determination, despite a rising tide of opposition, made the loss of the building to almost seem a foregone conclusion - it was dropped from the 2004 AIA Guide to Chicago. However; activists like Preservation Chicago, a grass roots architectural preservation advocacy group, continued to work to save the hospital, including a petition drive that obtained more than 13,000 signatures. Independent County Board members managed to muster enough votes to put demolition plans at least temporarily on hold. A stroke earlier this year led Stroger to decide to retire from his post this past July, and now new incoming acting Board President Bobbie Steele has put her weight behind saving the structure, sending a letter to the Commission on Chicago Landmarks supporting landmark designation.

The 1914 Hospital, by architect Paul Gerhardt, is remarkable for its rich Beaux Arts facades and terra cotta ornament, for the way its distinguished massing holds down its site and adjoining park, and for its role for almost a century in guaranteeing generations of emigrants and the city's less affluent residents quality health care.

Cook County Hospital was saved by the strong political leadership of LPCI that turned the failing efforts of Preservation Chicago around. LPCI commissioned powerful photographic images of the building and its wonderful details, developed actual plans showing how it could be adapted for mixed use, and gained the backing of a major developer who stated it was financially viable. LPCI enlisted the media and applied skilled political pressures, taking advantage of a political rift in the Board to reverse the "done deal" at the 11th hour.

It was a process lesson in how, and how not to, achieve preservation goals. It is a great story yet to be told.

I am looking for more information on Paul Gerhardt. Specifically a building he did at Fullerton and Clybourn in 1895-1896. Any help appreciated.

Paul Gerhardt also designed Von Steuben High School. Does anyone know if he is the architect for Roosevelt High School? They are remarkable similar.