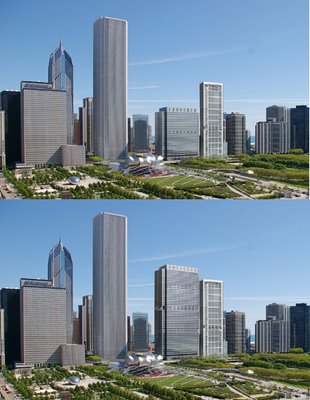 Matt Larson of Goettsch Partners, sends me these before and after renderings of the firm's Blue Cross-Blue Shield Building at 300 East Randolph, just north of Millennium Park. As you know, this structure opened as a 32-story tower in 1997, but was designed with the capacity to add height later to meet the expanding space needs. Now, an additional 25 floors and 800,000 square feet are to be added in a $270,000,000 project scheduled to be completed in 2010, increasing the building's population from 4,200 to 8,000 workers. The present, soaring atrium, which rises the full height of the current building, will reportedly be filled in by two new elevator banks that will serve the added floors.

If this were a spec office building, the expansion would probably never have taken place. Occupany levels in the East remain weak - new office expansion is now largely concentrated in the West Loop. Blue Cross-Blue Shield's parent company, Health Care Service Corporation, has been on a roll, however. The corporation, which provides policies in Illinois, New Mexico, Oklahoma and Texas, has seen its base of policyholders grow from 3 to 11 million over the last decade. Still, according to Crain's Chicago Business, while Blue Cross is the exclusive tenant of the existing building, about half of the new space is set to be leased out to other tenants. 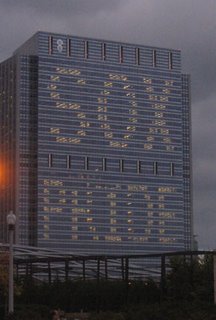 At a final 741 feet above its Randolph Street entrance, the completed building will match up more evenly with both the neighboring 1,136 foot-high Aon Center and the new residential towers rising in the nearby Lakeshore East development. It will become an increasingly prominent part of the backdrop to Millennium Park and the Pritzker Pavilion bandshell. Most importantly, it will provide an even larger billboard for the next time one of Chicago's sports teams are in the midst of a championship battle.

I want to use this photo in a journal article, what should I do regarding its copyright?