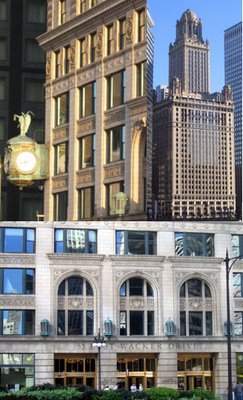 The Chicago chapter of the American Institute of Architects has announced that it will leave its present headquarters in the Merchandise Mart to move to the 35 East Wacker, usually known as the Jewelers Building that, with its great domed tower and four lower cuppolas, has been a landmark at Wabash and the river since its opening in 1927. The structure is already home to Murphy/Jahn Architects, which has its great conference/dining room in the high ceiling penthouse space just beneath the dome that was reputed to be a 1920's speakeasy.

AIA Chicago is taking over a 5,000 square foot space overlooking the river, from which they'll be able to watch the rising of Trump Tower on the north bank. Earlier this year, a competition for the design of the build-out received responses from 26 teams. The winners are a team of four design professionals, all under 30, collectively named "interface", which includes Daimian Hines and Natalie Johnson (both of HOK Chicago), Daniel West of KEO International Consultants in Abu Dhabi, and Andrew Senderak of Gensler in Chicago. AIA is working to make the renovation LEED certified, and hopes to move into the headquarters this coming January.