Smith+ Gordon Gill Architecture, which - unlike SOM itself, which is housed in Burnham's Santa Fe Building- will actually make its home in an SOM design, the Harris Bank building at 111 W. Monroe. Smith expects to have 60 to 80 people on staff by the end of the year. Sustainability will be one of the key goals at the new firm, which Nance reports is already in negotiation to build a 50 story zero-energy residential tower in Vancouver. 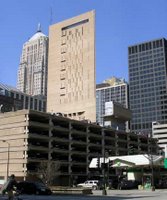 Tribune architecture critic Blair Kamin has a good story on how the GSA is mucking up one of Chicago's modernist icons, Harry Weese's Metropolitian Correction Center on south Dearborn, but its concrete exteriors are being covered in a protective paint that essentially destroys the character of the exterior. Architects are always glad to talk about their triumphs, but the fact that both George Butler and Associates and Wiss, Janney, Elstner Associates declined to be interviewed for the story on their work at the MCC is in indication that even they know they;re not exactly doing the right thing. 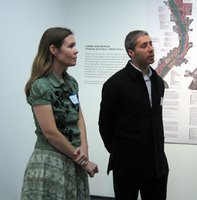 The November issue of Chicago Magazine includes a profile of Martin Felsen and Sarah Dunn, the wife and husband team behind UrbanLab, on the city's most innovative and rising firms, whose work is currently featured in both the MCA's Sustainable Architecture in Chicago show, and the upcoming Young Chicago at the Art Institute, opening November 16.