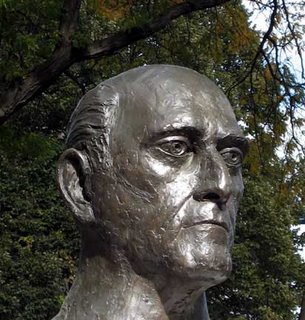 Here's a photo previewing a story that will go up, probably later this weekend, on the rededication of the bust of former Chicago Symphony Orchestra music director Georg Solti at a new location in Grant Park just south of Orchestra Hall. We'll have more details on the history and on the ceremony, which was attended by Solti's widow, Lady Valerie Solti, as well as by Chicago First Lady Maggie Daley.

Also a reminder that the award-winning documentary Uptown: Portrait of a Palace, which tells the story of Chicago's legendary 4,500 seat movie house, will have its television debut tonight (Friday, October 6th) at 10:30 P.M. on WTTW, Channel 11's Image Union, which will repeat at midnight this Sunday.

You are, of course, correct. The bust is in Grant Park. (I've got to stop drinking so much when I'm making posts.)

thanks for bringing this to my attention.