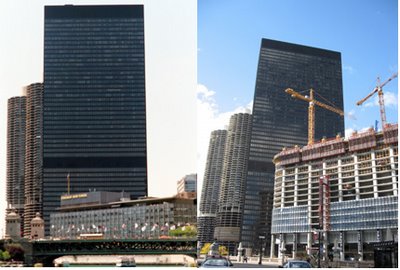 When it was first opened, Chicago's IBM Building, a tower designed by the firm of Mies van der Rohe, and completed in 1973, four years after the architect's death, was one of the city's most prestigious addresses. Things change, however, and the building's present owner, Prime Realty Group, is seeking approval to convert an increasing portion of the structure to residential use.

In some ways, the tower is even more classically Mies than the iconic Seagram Building in New York. There's no bustle at the back, just a pure rectangle almost 700 feet tall, sited on a raised plinth that maintains its uniform height even as State Street to its west inclines steeply as it flows down from the level of the bascule bridge crossing the Chicago River.

For years, along with the twin cylindrical towers of Bertrand Goldberg's Marina City, just across the street, the IBM dominated the north bank of the river, placed in gentle perspective against the low Chicago Sun-Times building to the east. That building is gone now, however, replaced with an under-construction Donald Trump behemoth, a 1,100 foot high tower that is casting the IBM into its shadow. (It was reported that when Trump's project still had an office component, it was being marketed to current IBM tenants with the argument that the Trump would block all of their views.)

Earlier this year, IBM left for other quarters, and the iconic, cubic IBM sign was changed to the property's new, prosaic name of 330 North Wabash. The Chicago Tribune reported earlier this month that 36% of the building's space is currently vacant. Its current signature tenant, the powerhouse law firm of Jenner and Block, is also set to leave for new digs in another couple years, leaving another 16 floors empty.

For now, the plan is to convert floors 3 through 14 into 275 condos. More floors may be converted as they become vacant. While reported sale prices will be about half that of the high-end Trump units next door, the fact that the IBM is hemmed in by taller structures along its long and east and west facades could make it a tougher sell.

Despite the IBM's extraordinary quality of design and its importance in Chicago's cityscape, it has yet to be designated an official landmark. It has no legal protection against dramatic, or even destructive alterations. Its current owners can do with it pretty much whatever they want.

I hope to god they don't screw up the exterior with balconies like they're doing to 55 East Monroe.

The big problem is the city code requirement for operable windows in residential towers. That will require a major change [replacement] of the exquisitly detailed windows. Apparently the city believes it is ok for a ducted mechanical ventilation system to bring in filtered and tempered fresh air into offices all day long, but not acceptable for condominiums.

Balconies in high rise buildings are really wierd- no one uses them because of the high winds.

Does anyone know if the conversion to condos ever actually happened? Who are the building's current tenants?