Will Chicago Music lose its way in our digital world? Deborah Voight's Salome Brings Chicago's Lyric Opera back to the Air 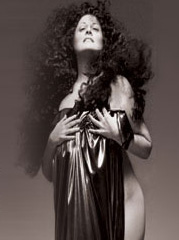 After a four year absence, Lyric Opera of Chicago returns to the airwaves with this evening's (Saturday, October 21st) opening night performance of Richard Strauss's Salome, sung by the newly-svelte Deborah Voight and conducted by the company's music director Andrew Davis. The broadcast, which begins at 7:00 P.M. on WFMT, 98.7, also reunites the broadcast team of Lois Baum, former WFMT program director Norman Pellegrini, as well as adds current morning co-host Lisa Flynn. The season's other opening night performances are also scheduled to be broadcast, and later syndicated to an international audience estimated to include 21,000,000 people.

Two factors made the renewal of the broadcasts possible. A new union contract substitute up-front fees and revenue-sharing for traditional royalties. And just today, Lyric general director William Mason announced a $2,000,000 grant from the family of Lyric trustee Matthew Bucksbaum, head of General Growth Properties, the shopping mall powerhouse whose local properties include Water Tower Place, Northbrook Court, and Oakbrook Center. The gift is conditional on Lyric raising an additional $2,000,000 from other sources, and would provide funding for the broadcasts through 2011-12 season.

Will Chicago's Classical Music and Opera Ever Find It's Way in our Digital World?
This puts Lyric far out front of the Chicago Symphony Orchestra, whose own broadcasts have been off the air since 2001, and which hasn't issued a commercial recording in several years. The Metropolitan Opera has launched its own channel on Sirius Satellite radio that includes both live performances, as well as all-day schedules of historic performances. (The all-day schedule includes, for example, includes a 1951 Rigoletto with Richard Tucker and Leonard Warren today, and a 1955 Tales of Hoffman with Tucker, Rise Stevens, and Roberta Peters, conducted by Pierre Monteux.)

Last month, Mason told Tribune reporter Charles Storch that Lyric is also exploring such options as streaming performances on the internet. Chicago arts companies can be notorious for not playing well together, but if we were smart, we'd be contemplating a Chicago-based non-profit corporation that would draw on the city's rich classical music landscape. Both the Lyric and CSO have astounding archives of recorded performances, as does WFMT, which includes broadcasts of the Chicago Sinfonietta and Grant Park Symphony.

Add in the performances from the Music Now and Music of the Baroque series, and the highly innnovative productions of Chicago Opera Theater, and you'd have not only one of the most potent collections of great performances in the world, but a branding powerhouse that could power its own broadcast channel, issue recordings both as physical CD's and as downloadables that could be available on the individual organizations websites as well as on-line outlets such as iTunes.

Right now, the Met is one of only three classical channels on Sirius (the other being generic "Symphony Hall" and "Classical Pops" outlets.) That situation will not last long, and if Chicago doesn't move quickly, it will find itself shoved to the sidelines as the traditional outlets on which classical music and opera have depended continue to undergo slow, painful deaths. CD retailing is collapsing -once-mighty Tower Records is undergoing liquidation- while FM stations devoted to classical decline in number, and those that survive are increasingly run on auto-pilot.

This is one of those small windows of opportunities that determine the shape of the future. If you're not on the inside when they slam shut, you'll be on the isolated and increasingly troubled side of history.