Adrian Smith, a resident sizes up his new Jazzy SRO, books by the chapter, and the Hunchback of Fenchurch

Good things to listen to and read:

Adrian Smith - we've mentioned this one once before, but here's a great interview of Adrian Smith, the former SOM architect behind the Trump Tower and Zero Energy Tower in China, by Edward Lifson on Hello, Beautiful. Listen to it here. 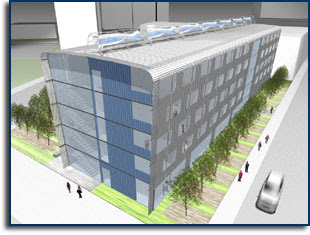 Einhorn has another great piece where Helmut Jahn's flashy - and sustainable - new Near North SRO is seen through the eyes of one of its tenants, Thomas Gooch (apologies if I've gotten the spelling wrong.) Be forewarned that you will briefly encounter my voice in the piece, but, thankfully, a lot more of it is given over to Mr. Gooch, whose first reaction is not unlike that of most of us the first time we encountered bare-concrete modernism, "It looks like a warehouse. . . I don't know if they're going to do some more construction in it, or if they're going to leave it like that. " Once he sees his apartment, however, with its private bath, new appliances, and large windows looking out over the skyline, he begins to warm up to the place. "I think it's wonderful," he says, "especially the view. . . . I can get up in the morning on a nice day and see outside, see the Sears Tower." Listen to it here.

Reinventing the Bookstore - Bob Thompson of the Washington Post reports on the Caravan Project, funded by Chicago's MacArthur Foundation, which seeks to create a broader distribution for small-press books by bringing the process into the digital age, which couples printing on demand to increase the selection of bricks-and-mortar retailers and better control inventory, to downloadable audio (using text to speech technology) and digital versions of the books, including the option to download only specific chapters. Read about it here. 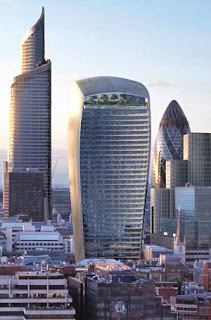 Pearman takes on the burst of mostly clumsy new projects that would crowd and overshadow Norman Foster's affectionately received Gherkin. Where the Gherkin offers elegance, the newer buildings too often offer only bigness and an often graceless eccentricity. Pearman hones in a new tower by Rafael Vinoly that has been dubbed "The Walkie-Talkie" for the way its bulk increases towards the top and leans forward as if stooped by the burden of its height. To me, it's a cross between Salvador Dali and Claes Oldenberg - The Limp Electric Shaver. Pearman doesn't mince words. "I reckon it is a stinker." "The world's best skyscraper cities tell us," he Pearman, "that the ensemble is what matters, not the individual building." It's a lesson that Chicago's hapless "cram it in with a shoehorn" Department of Planning and Development appears uninterested in learning. Read it all here.