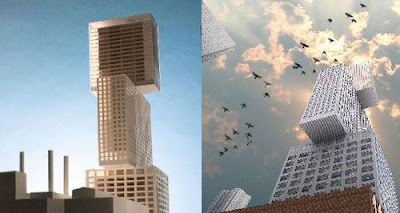 Via the AP comes word of Rem Koolhaas's latest project, a 52-story tower mixing condominiums, hotel, and artists' lofts, galleries and retail. "We are creating something slightly more memorable and slightly more energetic,'' Koolhaas is quoted as saying at the unveiling of the design. "What New Jersey lacks is some visible evidence of a new beginning.''

"Slightly" in this case is a pivot point for ironic understatement. 1111 First Street reminds me of the back of my closet, a seemingly random stacking of boxes, in the case of Koolhaas painstakingly engineered to create what looks to be three separate buildings piled perpendicular to each other, giving the visual impression of being perched so precariously that it looks like a single strong gust could topple the whole thing over.

It's a bravura expression, sure to stand out, but it makes me wonder whether Koolhaas is staking out a new uber-mannerism, based on outrageous gestures, increasingly tangential to program, and more about doing something most largely because you've just figured out how you can. Of course, in both Chicago and Seattle, Koolhaas created designs that inspired deep skepticism at their unveiling but ultimately proved enthralling - and programatically astute - when when we could finally encounter them in the flesh. We'll may have to wait for Jersey City to be built before we know whether Koolhaas is just coasting or still moving forward.

Mr. Koolhaus may be considered by many to be the cat's meow, but after spending two years at IIT and having attempted using the the student center, if think he's absent clothing to say the least. For example: It's a most difficult building to find one's way around. The restrooms (women's) were not furnished with any seats, no shelves for books and bags, and cheap hooks and tissue paper holders that broke within a year. The steps to the lower dining area are a hazard to anyone with poor eyesight and fortunately they put contrasting tape down so one could see the edges. They seating in the common areas prevents serious study because of the forced seating posture. I could go one illustrating the lack of user friendliness in this building.

In short, I concur with your assessment of Kookhaus's latest hubris as architectural design.

Well Petra (Blaisse?), I went to IIT for 3 years, and I found Mr. Koolhaas' building to be not only that cat's meow, but also the cat's pajamas. It is absolutely delicious, a please to stroll through. Perhaps you can find the conveniences you are looking for in a Steven Holl or similarly some type of motor home. I love that Rem has finally got to the point where he can say "F-it" I am doing something gorgeous. Poor pld New Jersy needs a touch of fancy. I love it--just the rendering gives me goosebumps.

I could ramble a two paragraph diatribe on why this boxy juxtaposition of cubes adds nothing to New Jersey's notorious good taste in urban planning and high environmental standards, but one word: yuck. Glad it will be there and not here.