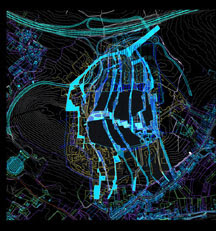 Next Wednesday, March 21st, Julia Czerniak of CLEAR will be at IIT taking about Olin Eisenman, the collaboration between landscape architect Laurie Olin and architect Peter Eisenman whose works include the Wexner Center for the Arts, and the Berlin Holocaust Museum.

On Thursday, March 22nd, ULI Chicago will be presenting a breakfast program that will discuss bringing sustainable values to buildings constructed before that was the big thing to do. Sadhu Johnston, Commissioner of the City of Chicago's Department of Environment will moderate, and the speakers will include Robert Bagguley, President - Midwest Region, Transwestern Commercial Services and Phil Baugh, Director of Leasing, Green Exchange, Baum Realty Group.

You can see the complete, wide range of events for the balance of March here.

Dinomies Postscript: Joan Pomaranc informs us that neither Mies van der Rohe's Farnsworth House or the Dick Tracy Museum made it into the second round of voting for the Seven Wonders of Illinois. The White Squirrels of Olney, World's Largest Ketchup Bottle, and Frank Lloyd Wright Home and Studio in Oak Park remain in the hunt. You can see all the surviving contenders, and vote your favorites here.