How wonderful it is to have nature close at hand in the often hard city. To see the large flocks of Canadian Geese in Chicago's parks. Except that these geese don't

migrate - they've settled in for the long haul, and their populations are exploding. Unfortunately, the two things geese are exceptionally good at are breeding and taking a dump. When General Patton talked of his army racing through Germany "like crap through a goose," he wasn't kidding. According to an article in Chicago Wildlife Magazine, a goose can transform food into waste in just seven minutes. A single bird can produce over a pound of droppings per day.

The geese have resisted various techniques to control them. Growing the grass taller works for a while, but then the geese just eat the grass. Seattle has tried

something called "scare eyes"; the geese soon lose their fear. Letting dogs chase them away just moves the geese around, and often exhausts the dog to the point where it feels the need to relieve itself, as well.

The Grant Park Advisory Council and Grant Park Conservancy is trying a different tact. They are looking for volunteers this Saturday, March 24th, to learn how to locate "goose eggs so that the eggs can be depredated, preventing them from hatching." Again according 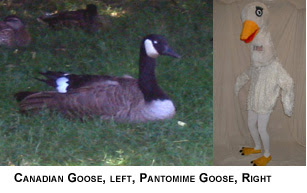 to Chicago Wildlife Magazine, it's all about fool a goose. Under strict state and federal permits, egg shaking or egg addling is allowed for a short time after the eggs are laid. The eggs are then placed back in the nest. The now cruelly deceived goose will "will continue to incubate the eggs until it is too late in the season to lay a new clutch."

The Grant Park Advisory Council says the technique "is endorsed by the Humane Society of the United States ." Do NOT, however, attempt this on your own. "Trained volunteers will help find Canada Geese nests and flag them on supervised workdays and then a wildlife management company will perform the egg depredation. " Training will be offered for volunteers this Saturday, March 24th, from 10:00 A.M. to 12:00 P.M. at the Daley Bicentennial Plaza Field House, 337 E. Randolph St. Call 312-829-8015 for more information.