WBEZ's Edward Lifson sits through another evening of Garrett Kelleher avoiding giving specific answers so you don't have to. 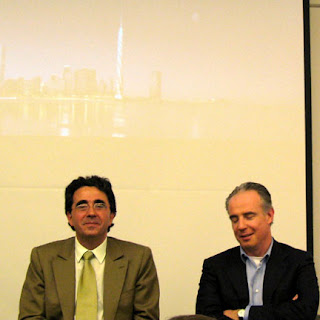 The host of Hello, Beautiful, which this Sunday offered up a compelling interview with Trump Tower and Burj Dubai architect Adrian Smith (listen to it here), last night scooped all other media by posting, just hours after it took place, his report on developer Garrett Kelleher and architect Santiago Calatrava discussing their 2,000 foot high corkscrew Chicago Spire at the Chicago Architecture Foundation Monday evening.

The ever coy Mr. Kelleher said the square foot costs for the Spire's units will fall somewhere between Chicago's current highpoint of $1,200 and London's top at $9,000. While Kelleher was apparently vague about how the project is to be financed, a January 28th article in the Irish Independent indicated that the €949 million (for now) project cost was being picked up by the Anglo Irish Bank. The tower's latest design was still kept under wraps - it's currently scheduled to be unveiled at a meeting of SOAR (Streeterville Organization of Active Residents) on March 26th, at a public meeting at the Courtyards of Marriot. (Reservations required: info here.) The project is due to go before the Chicago Plan Commission on April 19th.

The far more forthcoming Mr. Calatrava discussed the project with his usual passion, including its relationship to the adjacent, still unfunded DuSable Park. You can read Lifson's excellent and extensive report, complete with several illustrations, here.