Two videos on YouTube are the latest volley in the ongoing battle to save Jarvis Hunt's 1927 Lake Shore Athletic Club, which Fifield Development is seeking to demolish and replace with a 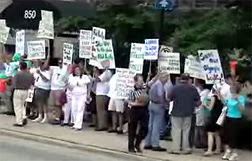 First up was a video submitted by Bruce A. Beal on the June 3rd demonstration at the building, organized by Preservation Chicago, where volunteers were encouraged to show up in athletic attire. Board member Laura Stigler Marier put the effort in context of Chicago's fight to win the 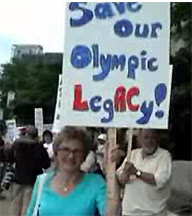 2016 Olympics. "They want to build a legacy," says Marier. "Well, we've got your legacy right here. This building was site of the Olympic swimming trials in 1928."

Yesterday, an excellent five minute documentary by Anna Weaver was posted chronicling both the building 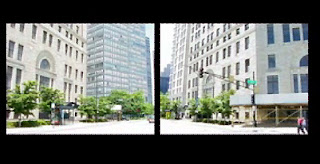 and the fight to save it. It includes interviews with architecture critic Cheryl Kent, Better Government Association Executive Director Jay Stewart, and Lost Chicago author David Lowe, who points out how some of the city's most powerful institutions routinely trash Chicago's architectural history. "[The] real problem," says

Lowe, "is that places like universities -like Northwestern, let's say it- churches that always want to tear down buildings, foundations, all are tax exempt. I just don't think you can give people like that that tax exemption and then suddenly, as it were, flip a profit." The video lingers over the ornamental details of the facade, which Lowe talks of as a

blending of Classical and Art Deco elements. "The building works well, I think, because its very reticent."

The Club sits just south of Mies van der Rohe's iconic, trail-blazing 860-880 Apartments. Says Todd Palmer, design partner at the Program Collective, "Commentators have talked about the 850 Building, the Lake Shore Club, as an excellent backdrop to the Mies. Which is true, but I think it's something more than that. I think the buildings together 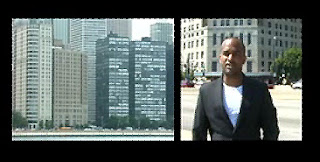 form a strong and dynamic composition"

The building resides in the 42nd ward, and that ward's newly elected alderman, Brendan Reilly, may well be the one who ultimately decides the Club's fate. Earlier this year, Reilly defeated 36-year incumbent Burton Natarus in a contest where his large margin of victory (he won in the first round, without being forced into a runoff) was generally perceived as a reaction to Natarus' perceived coziness with big developers - usually also major contributors to Natarus' campaigns - at the expense of the integrity of the community's rich architectural legacy and fabric.

Reilly was very visibly in evidence at the June 3rd rally, and he will appear again, along with downtown's other new alderman, Robert Fioretti, who in April defeated another long-time incumbent in the 2nd ward, 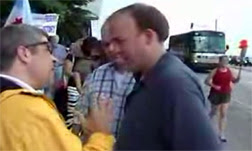 at a Tuesday night, June 26th forum, sponsored by Friends of Downtown, that begins at 5:15 at the Claudia Cassidy Theater at the Chicago Cultural Center at Randolph and Michigan. The forum provides preservationists and downtown residents another chance to query Reilly about his impending decision on the Lake Shore Athletic Club's future.

What was torn down to build "Mies van der Rohe's iconic, trail-blazing 860-880 Apartments"?

Nothing was torn down.

I can't get too excited about this building, but I also have little confidence that the Fifield - Lagrange team would produce a worthwhile replacement, however, i'd sure like to see just what they're proposing. Have they put out any plans and renderings?

...and NIMBY's that try to abort great architecture not yet out of the womb.

Developers as a rule are not interested what they put in the skyline, they are interested in their own bottom line. People who saw Lagrange's sketches for 850 LSD said the proposed building was even more appalling than that most unattractive building he designed at the corner of Pearson and LSD.

"churches that always want to tear down buildings"

Yeah, just like Prism Development "didn't want" to tear the Farwell.
When you go after a demolition permit for a church, to say you don't "want" to tear it down is an absurdity.