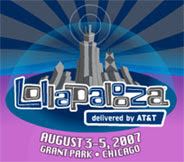 Conservancy/Grant Park Advisory Council will be meeting at 6:30 P.M., tonight, Monday, June 18th to discuss the ongoing reforestation and other improvements to the park funded from some of the proceeds of what is becoming the annual Lollapalooza music fest, which takes over the southern districts of the park the weekend of August 3rd. Note that Monday's session will take place, not in the Council's usual Daley Bicentennial field house hangout, but in the Congress Lounge of Roosevelt University's landmark Auditorium Building.

President John Syvertsen has added been to this event, taking place this Thursday, June 21, beginning at 5:30 P.M. The evening will also include a tour of the schools studios and co-founders Eva Maddox and Stanley Tigerman discussion the school's program and next year's projects.

ULI Chicago takes its Act to Kane County - next Thursday, June 28th, at the The Center of Elgin, for a breakfast session, beginning with a 7:45 A.M. registration, that will feature county officials discussing how they're working to manage Kane County's explosive growth and a real estate developer talking about how he's exploiting it.

New Aldermen for Chicago's Downtown - Friends of Downtown will be hosting a Tuesday, June 26th forum, beginning at 5:15 in the Claudia Cassidy theater in the Chicago Cultural Center, for the two alderman - Brendan Reilly (42nd ward) and Robert Fioretti (2nd ward) - both of home defeated long-term incumbents earlier this year. Friends bills the event as "a chance to question the recently elected aldermen . . . about their goals, their priorities, and the process by which they'll determine citizen support for new projects." A reception follows the program.