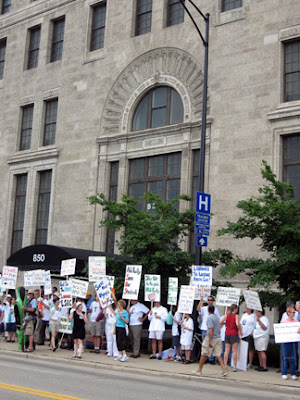 A crowd of protesters overflowed the sidewalks around Jarvis Hunt's 1927 Lake Shore Athletic Club early Sunday afternoon, demonstrating against the impending demolition of the building by Fifield Realty in favor of a new tower by Lucien Lagrange, architect of 840 North Lake Shore Drive, another recent building just to the south. 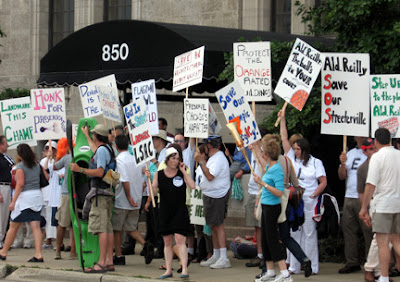 Organized by Preservation Chicago, the protest had an athletic theme, tied to both the club's function and its role as a site for trials for the 1928 Olympics, resulting in a man and his kayak (above) and Preservation Chicago VP Michael Moran dressed in referee's garb. (below) 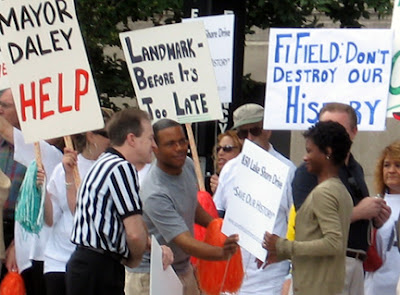 Fifield's request for a demolition permit for the Club is in the middle of an automatic 90-day hold because of the structure's designation as "Orange" (potentially significant) on the Chicago Historic Resources Survey of potential landmark buildings. The Club provides a graceful, classical backdrop to Mies van der Rohe's iconic 860-880 Lake Shore Drive apartments, built just a quarter-century later, just to the north. 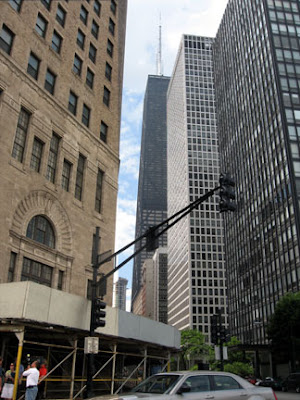 I participated in the Preservation Chicago rally yesterday, and was so pleasantly surprised to see so many of my fellow Chicagoans out there supporting the preservation of the LAC! Saving this building will touch on two of Mayor Daley's hot-button issues: Stir the Soul 2016, and his love of all things green... Preservation is the responsible thing to do!

Typical STUPID ASS Chicago... Demolish a perfectly good old building that is a landmark to build another condo tower when there are PLENTY of plots of land ALL over Streeterville called PARKING LOTS! Build on those ugly ass things, not on top of a piece of Chicago's heritage!