City of the Future: A Design and Engineering Challenge, has opened at the Museum of Science and Industry. 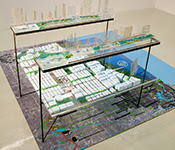 The exhibition showcases Growing Water: Chicago in 2016, UrbanLab's $10,000 first prize winning entry in the History Channel's recent The City of the Future competition. It envisions water as "the new oil" and develops strategies for recycling 100% of the water that the city of Chicago uses. Also on display will be the seven entries UrbanLab beat out, from Valerio Dewalt Train Associates, partnering with Arup, to Garofalo Architects and Strawn Sierralta and four others, as well as the winners from the New York and Los Angeles competitions. Read more about those entries here and here. At the MSI, an interactive display promises visitors will get a shot to build their own vision of the future. The exhibition will run through October 7th. 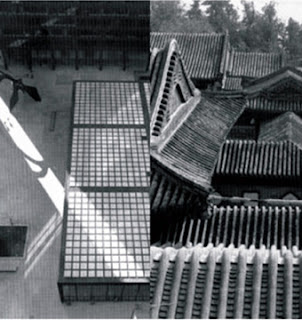 3360 South State Street on the Mies-designed IIT campus. Sponsored by IIT's Mies van der Rohe Society, it features ten pairs of supersized black and white photos by architect and author Werner Blaser exploring "correlations" between the work of Mies and Eastern modes of building. The photos are taken from the book of the same name by Blaser and Johannes Malms, where they were described by the Architectural Review as being of "such breathtaking power that they leave one gasping for air." Hours for the exhibition, which runs through July 29th, are 10:00 a.m. to 3 p.m. daily, except June 23rd and July 4th, and the $5.00 admission supports the restoration of Mies buildings on the campus. Admission is free to visitors purchasing the $5.00 self-guided iPod or docent-led tours, at 10:00 a.m. and 1:00 p.m., which leave from the Rem Koolhaas-designed Tribune McCormick Campus Center, 3201 South State. More information here.