On June 15th, 1907, William Le Baron Jenney suffered twin indignities. The first, he found himself in Los Angeles, the 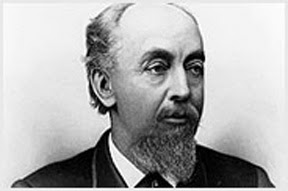 second, he died. He has remained dead now, give or take a week or so, for one hundred years.

Celebrating the anniversary of someone's death is something you'd think you'd wish only on an enemy, but we're always looking for any excuse for a good party. If a birthday isn't available in a large round number, a death can be made to make do.

So over the next few weeks, we're saying a big, "Here's to you, WLJ," with a series 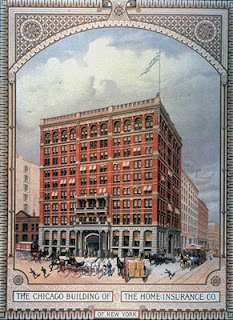 of events that commemorate the 100th anniversary of Jenney's passing, including a Saturday symposium

at the Chicago History Museum, the dedication of a new Jenney monument at Graceland Cemetery, and a series of lectures at the Chicago Architecture Foundation.

Jenney's major claim to fame is as "The Father of the Skyscraper." Leroy Buffington may have been the first to patent the idea of a metal-frame building, but Jenney was the one who got it done, in the 1884 Home Insurance Building. Read all about Jenney - and see the pictures - here.

Good article with a few errors. According to Theodore Turak, Jenney's biographer, the bird cage story told by Ericcson is probably apocryphal. BUT it is a great story!!

You quote Sullivan correctly, but Sullivan had the wrong name for the Parisian school that Jenney attended. Jenny graduated in 1956 from Ecoles Centrale des Arts et Manufactures.

The only serious error is to have mentioned Buffington. Leroy Buffington applied for a patent in 1887 for a skeleton construction with a design for a 28 story building designed in 1881 as well as two designs in 1882. However, in a 1892 court case in which Daniel Burnham testified on behalf of Jenney, it was established that Buffington had systematically backdated drawings to make them appear earlier than the Home Insurance.

As Jenney was born in 1832, this year is in fact also the 175th anniversary of his birth.

From my records, Jenney loved California and went there to spend the last years of his life intentionally, which means it was not an injustice to him.

Actually you are both wrong.
Jenney graduated from Rayen High School in Youngstown Ohio in 1959.