The architecture of colonialism and revolution, in crumbling solidarity 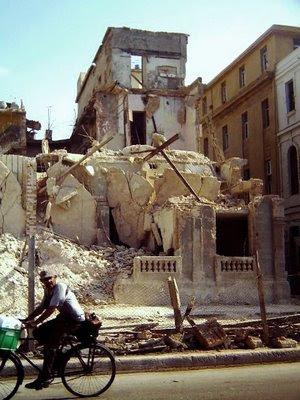 Computerworld has an interesting Reuters article on the lengths residents of Cuba must go to post independent blogs.

Only government employees, academics and researchers are allowed their own Internet accounts, which are provided by the government.

Regular Cubans are allowed only to open e-mail accounts that they can access through terminals at post offices, where they can also see Cuban Web sites, but access to the rest of the World Wide Web is blocked.

Only 2% of the island's residents have access to the web. Because of this, bloggers have to resort to subterfuges such as dressing up like foreign tourists to frequent internet connections at local hotels. (The $6.00 an hour rates are the equivalent of two weeks pay for the average Cuban). The topic of the independent blogs range from criticism of the bureaucracy, Soviet era cartoons, and a photo blog on life in Havana with numerous photographs - including the one at the top of this post - of the once grand buildings of the city now crumbling under the long, toxic convergence of a Soviet pull-out of support, continuing United States embargoes, and a repressive and ossified authoritarian state.

Nor is the decay limited to structures of the colonial period. Outside of Havana, 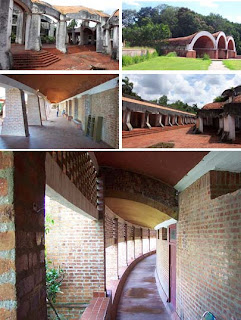 the grand Escuelas Nacionales de Arte began construction in the 1960's as a vanguard expression of revolution, but by 1965 revisionism rebranded the fantastical structures with their Catalan-inspired vaults as "bourgeois", and they've been allowed to decay pretty much ever since.

And while we're talking about revolutionary-era architecture in a market economy world, here's a report by New York Times architecture critic Nicolai Ouroussoff on how 34-year-old Russian billionaire Sergey Gordeev appears to be emerging as the champion of Moscow's early Communist era architecture, including the iconic, endangered 1927 Melnikov House. Irony abounds.
(Click on time for permalink) 12:01 AM