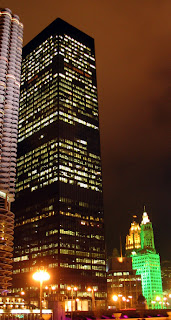 in some of the details of a pair of agenda items for this Thursday's monthly meeting of the Commission on Chicago Landmarks. The first includes - all in one swoop - "Preliminary Landmark Recommendation, Report from the Department of Planning and Development and Final Landmark Recommendation to City Council" for the last skyscraper designed by Mies van der Rohe, the 1973 IBM Building, now known, after the departure of its namesake tenant, by its address, 330 North Wabash.

Immediately following this is the second item, "Review of Pre-Permit Submission and Recommendation to City Council for Approval of Class L Property Tax Incentive " also for the IBM Building.

Now it all makes sense. When a classic unprotected building is under imminent threat, the Commission is more than likely to crawl at the official pace of a lumbering bureaucracy, but in the case of the IBM, it's the developer, Prime Group Realty Trust, that is pushing for designation, in order to qualify not just for local tax incentives, but federal tax credits, as well. The plan is to convert office floors 2 through 14 into a 300 room hotel.

The IBM has been suffering as an office building with the loss of several key tenants. (When Trump was planning an office component in his tower, he attempted to 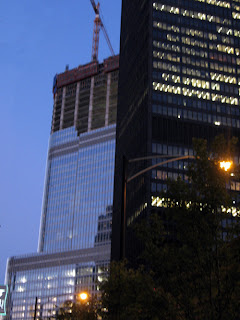 lure IBM tenants with the fact that his building was going to block their views. Then he decided to dump office space from his own project.)

Chicago is reaching the peak of a hotel construction bubble. According to Crain's, room rates have jumped 24% over the past two years, while occupancy rates have hit levels not seen in at least two decades. The number of new rooms either planned or under construction is topping 9,000, including, just across the street from the IBM, a five-star, 286 room hotel at the base of the Trump Tower, scheduled to open - depending on who you believe - in either December or February. If Prime Group's plan goes through, minimalist Miesians and glitz-crazed Trumpists will soon be able to glare at each other in mutual disdain from either side of Wabash.

Two blocks to the south, Kimpton Hotels has just announced their plans to purchase the 27 story-high 203 North Wabash - opened in 1928 as

the Old Dearborn Bank and one of only two office buildings designed by Rapp & Rapp, the movie palace architects behind the Chicago, Oriental, Palace and Uptown - and convert it into a 220 room boutique hotel. Two blocks to the north, the beautiful park next to the AMA building has been obliterated for still another hotel, the 259 room Hotel Palomar.

Making IBM an official landmark means any future changes to the protected exteriors will have to be approved by the Landmarks Commission. Let's hope the Commission doesn't give away the store in getting to that point, as they almost did recently at the Palmer House, bargaining away the historic retail facades for a jarring storefront "modernization". A protest led by Preservation Chicago scotched that plan, but the 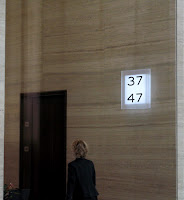 decimation of the hotel's grand block-long arcade, rubber-stamped by the Commission, is well under way.

At the IBM, garish oversized elevator signs as glaringly bright as a shopping mall parking lot, part of a Philippe Stark redesign, have already been slapped on Mies' travertine. Meanwhile, on the other side of State Street from the IBM, Bertrand Goldberg's Marina City complex, among the most iconic and important emblems of the city, yet one the Commission has made no visible effort to landmark, continues to undergo a series of desecrating alterations under the commercial properties' new owners.

Not really, although many developers have no problem worshipping inanimate objects, as long as they're flat, green and negotiable.

Lynn,
Are you making fun of capitalism? Do you not believe in it?

Will this make IBM the youngest landmark in Chicago? I remember you running a story about a landmarks application for Marina City a while ago... what is the status?

Poor Marina City. Dick's Last Restort might be the coup de grace. What could have been...

In response to one of the above comments, it seems that Lynn can approve of capitalism while disapproving of persons who destroy the character-filled buildings that make our city special.

Thank goodness for developers. They are doing great things. But their profit-seeking goals are thankfully held in check when they seek to demolish a nice structure.

We should not begrudge anyone from seeking a profit. But begrudging is a good option when someone is demolishing a building at the expense of the public good. I don't recall Lynn ever taking the pro-preservation side of an issue that was wrong.

Remember that there have been well over a hundred high-rise projects constructed and/or proposed in the past ten years. Like the main preservation groups in town, Lynn has only spoken out against a handful of the projects. Only when a great building was at risk has Lynn taken up the cause.

Rational preservation advocates really need to put a check on the fanatics within their movement. It's time to tone down the rhetoric. I don't know if Lynn qualifies as a fanatic, but there are way too many of them. These people are not very bright and easily get whipped into a frenzy. Every time they win a skirmish, they feel more empowered and the standards for buildings deserving of protection keep dropping. Some of them are communists. Ironical don't you think, that the individual rights and free expression that created landmark buildings are the very things they despise. When rational preservation advocates call these freaks to arms, the result is damage to the urban environment.

As for the IBM building, why should we subsidize the developer when the building is clearly not endangered? It's just another of many abuses of preservation law.

Actually, the Miessians will be staring at a sodium vapor lit parking garage. Hopefully IBM doesn't get the 55 monroe treatment.

Good point. Although, since parking floors are usually not as tall as occupied floors, I'm still holding out hope that floor 17 in the Trump Hotel could be close to the level of floor 14 in the IBM hotel. I've been disappointed before, but I still can't believe - or won't allow myself to believe - the Landmarks Commission would approve 55 Monroe style alterations to the IBM's facade.

The IBM designation as a Chicago landmark protects the interior of the lobby and the entirety of the podium and plaza as well as the exterior. That is as it should be since the lobby is enclosed in transparent glass surfaces, making the interior elements part of the view of the building. The question is will a change of use to a hotel be able to respect those elements?