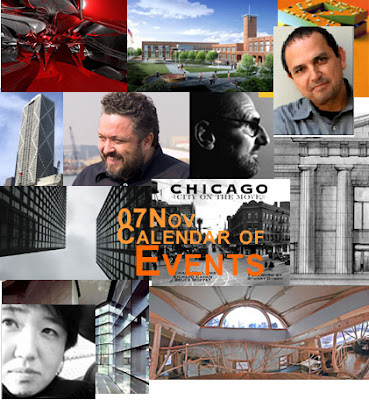 Can you spot the only one of the preceding list of names who will NOT be appearing in Chicago in November? On this month's calendar, UIC has no fewer than four lectures, including Momoyo Kaijima of Atelier Bow-Wow on the 12th, Alejandro Zaera-Polo of Foreign Office Architects on the 16th, Kamiel Klasse of NL Architects on the 19th, and Morphosis' Thom Mayne on the 7th. Gunny Harboe discusses his recent projects at a lunchtime CAF lecture on the 28th, while Thomas Gordon Smith discusses The Classical Perspective for Landmarks Illinois noontime, November 15th, at the Cultural Center. Bruce Mau appears at Archeworks on the 14th - that same day Christopher Lee will dicuss his firm's recent work at another CAF lunchtime lecture. SOM's Mark Sarkisian will talk about the legacy of legendary engineer Fazlur Khan at the Union League for SEAOI on the 13th.

It all begins tonight, Thursday, November 1st, with architect Teddy Cruz delivering the APA/NBM L'enfant lecture, From the Global Border to the Border Neighborhood, at the Cultural Center, while over at Archeworks, you can take in projects at the Midterm Student Critique. Then on Friday, the expanded Graham Resource Center in Crown Hall at ITT celebrates the debut of its expanded facilities, followed by a lecture by Kenneth Frampton, followed, in turn, by a concert by this son, Peter. (Again, two of three statements in the preceding sentence are true.)

But why exaggerate when the month is so stuffed with goodies, including an appearance by Xefirotarch's Hernán Díaz Alonso at the Art Institute, the 2012 London Olympic's Ricky Burdette on Global Cities at CAF, Douglas Kelbaugh on the current "state of the art" of sustainnable architecture in the U.S., China, and worldwide, for the Chicago Humanities Festival. There's a program of short films on Chicago and its architecture showing at the Gene Siskel this Saturday and next Tuesday, Jinhee Park at IIT, religious architecture at AIA Chicago, Richard Cahan and Michael Williams talking about and signing copies of their book, Chicago: City on the Move at CAF�, and Roald Gunderson talking about Whole Tree Architecture at the Chicago Center for Green Technology.

Believe or not, there's actually a lot more great events we haven't even touched on - over 50 in all. Check them all out here.

I think you mean Mark Sarkisian