Dunham Building Appears to be Toast 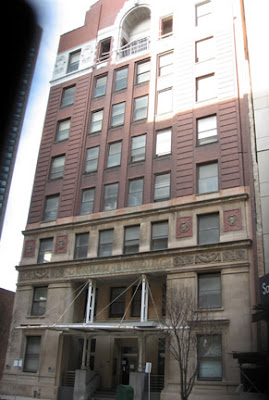 The offbeat, eight story building at 450 east Ohio with its large attic window and graceful ornament appears about to be ground into the dust. The Dunham building stands behind the new 600 North Lake Shore Drive megatowers, in a district where new residential high-rises are threatening to crowd out everything else. According to postings on the Skyscraper Page, Robinette Demolition is swathing the building in scaffolding and bringing in the dumpsters as a prelude to demolition.

I've had a hard time finding more information on the structure. Apparently, it doesn't even have the protection of being rated "orange" on the Commission on Chicago Landmark's Survey of Historic Buildings potentially worth saving, although the survey's database includes a cryptic listing for "400-450 East Ohio" with no information other than the address itself.

For a long period beginning in 1944, the Dunham was home to the famed architectural photography firm Hedrich-Blessing. Their second floor offices were designed by Larry Perkins and Phillip Will, the founding architects of the still very much alive firm of Perkins+Will.

No one would claim The Dunham to be an architectural masterpiece, but in an increasingly homogenized district of look-alike condo towers, its quirky charm will be missed. 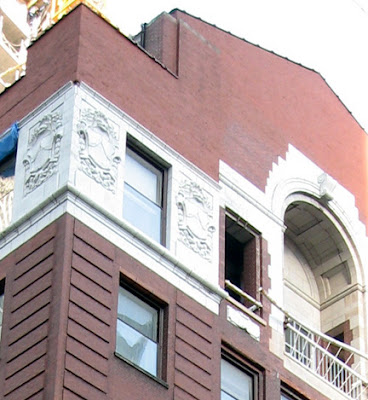 I wonder what the top floor is supposed to look like.

the building was originally for the c.a. dunham company. a steam and hydronics manufacturer. it was their administrative section. I have a picture of the top floor