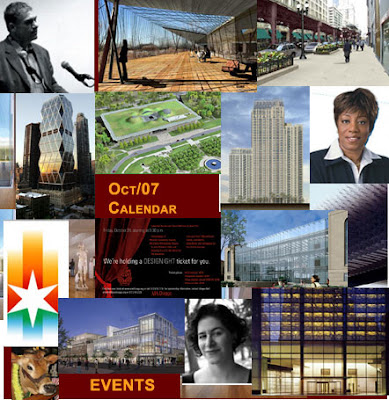 If you're bored this month, you've got a real problem. There are over 50 events on the October Architectural calendar.

Mary Pattillo discussing her new book Black on the Block: The Politics of Race and Class in the City, at CAF, where later in the day there's a panel on China and the Crisis Infrastructure. Engineers discuss the CTA superstation at SEAOI's monthly dinner meeting. Sadhu Johnston, John Ronan, Sarah Dunn and Helen Kessler at Chicago Humanities Festival events. Rachel Weber discusses TIF's at APA Chicago. DeStefano+Parters Scott Sarver and Avi Lothan discussing current work for Friends of Downtown at the Cultural Center. Graham Garfield on lost remnants of the historic Chicago "L". Plus a full roster of programs at the Chicago Center of Green Technology.

And, as they say, much, much more. Check it all out and start placing reminders in your calendar here.