Jacques Brownson's 1965 Daley Center may be taking the iconic building in a radically different direction. MA's website version of the story includes a blurry photograph, reproduced here, of a rendering of the rehab taken by a cell phone camera during a confidential presentation by architect Henry A. Douglas to a meeting of top-level city officials.

Douglas's proposal replaces Brownson's rugged Permi-Cone steel exterior with a classically inspired masonry design that echo's the traditional design and Corinthian colonnade of Holabird and Roche's 1908 County Building, which forms the west wall of the Daley Center Plaza. The redesign would be executed to dovetail with next year's centennial anniversary of Daniel Burnham's Plan of Chicago, and the spectacular Beaux Arts cityscapes created for the Plan by Jules Guerin.

A high ranking city official, speaking on condition of anonymity, admitted the rehab may be an effort to cater to Mayor Richard M. Daley's reported preference for classical designs, but the official denied the effort had anything to do with being in constant, desperate fear of losing his job. "I just want the Mayor to be happy," MA quotes him as saying, "Is that so wrong?"

The Daley Center's self-sealing Permi-Cone steel facade was thought to offer permanent protection requiring minimal maintenance, but a recent engineering study uncovered a steady leaching of the steel surface, caused by an unlikely source: meurdephyenol. Traditionally used as a buffering agent, the chemical has now been discovered to also be a byproduct released by bird droppings coming into prolonged contact with acidic precipitation and rising vapors from melting road salt, causing the meurdephyenol and carbon molecules to interact and break down the steel over time, resulting in a surface sloughing of now unbonded metallic particles.

The Daley Center has always been a popular roosting ground for the city's pigeons, but the engineering study cited the 1983 opening of the building's 32nd-floor health club as an acceleration point in the facade's deterioration. The exceptionally bright 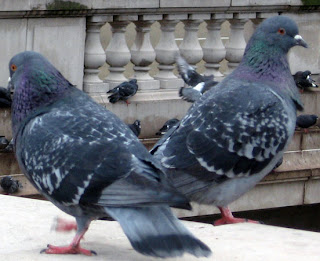 lighting scheme of the club attracts literally thousands of pigeons to perch along the ledges. The study found that the pigeons roost on the ledges while ignoring even such primal needs as food, water and mating, as their exceptionally small brains leave the birds staring through the windows, little heads cocked to one side, mesmerized by the motions of exercisers peddling furiously on the stationary bicycles. One leading ornithologist has estimated that the volume of droppings as roughly quadruple that normally produced by similar birds looking out in the other direction.

Department of Building officials issued assurances that the thickness of the facade panels precluded any danger of pieces of the building falling to the pavement and killing or enraging passerbys, but already a patch of burn-through corrosion on the 27th floor has exposed conduit and wiring installed by the FBI as part of surveillance for 1977's sting operation Higher Office, which resulted in the conviction of three senior Circuit Court Judges, seven attorneys and two pizza delivery drivers. Acquitted in the prosecutions were Judge Norbert Blye, two public prosecutors, their masseuse, and a police dog later ruled to be severely addled.

Am I the only one to find this proposal utterly dumb and outrageous?
Is "Making Mayor Daley happy" a good enough excuse to justify such a monstrosity?

I would have bought this April fools joke had it happened circa 1986. Though back then it likely would not have been a joke.

I hope this isn't a joke, Richard. This needs to happen here and nexdoor at Block 37 before it gets too far along.

had me going for a moment. I think the architect would have to be lagrange though

Hybridesign said...
This comment has been removed by the author.
4:16 PM

Nice April Fool's joke!!! Had me going there for a while. The pigeons/gym were a nice touch...

This reminds me. I have a great plan to turn the Farnsworth House into a cozy North Woods lodge with log cabin-style walls.

you had me going.

especially since i'm reading this on 4/8.

but it just got too ridiculous near the end.

I could see Daley deciding to re-clad Daley Plaza in stone though.