On Wednesday, Landmarks Illinois dramatized its Ten Most Endangered list for 2008 by providing several views of what they fear the landmarked Michigan Avenue Streetwall might become in the current climate where hard won protections are 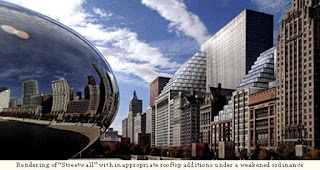 being chipped away by "compromises" that are undermining the most basic tenets of landmarks preservation.

It began with highrises like the Heritage at Millennium Park towering behind the Chicago Cultural Center, and the under-construction Legacy rising behind the Gage Group and University Club. Now, says Landmarks Illinois, with proposals to demolish all but the front third of the Chicago Athletic Association and placing another tower behind a former YWCA at 830 South, developers are threatening to turn the historic street into a sequence of false fronts, a Potemkin preservation.

To dramatize their point, Landmarks Illinois took a Robert Thall photo of Michigan Avenue and did a Sim City retrofit of how its appearance could change with stepped rooftop additions, in Marge Simpson beehive hair style, on the Gage Group, People's Gas and former John M. Smyth buildings. 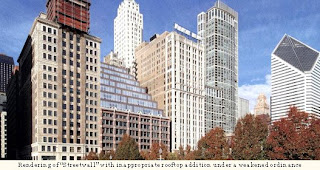 The one mistake they made was that the projected result probably looks a lot better than what might actually get built there.

Elsewhere, the list is a combination of the familiar and off-beat.

Landmarks Illinois adds its voice to the effort to landmark the 1888 Germania Club, for which a proposal is on Thursday's Landmarks Commission agenda.

The always energetic Sam Zell figures in two of the items: the Daily News Building, which reports say he wants to mutilate in order to replace its current public plaza with an office tower, and Wrigley Field, in 11th position a last minute addition, which Zell is working overtime to palm off on Governor Rod (I loved the team so much I bought the stadium!) Blagojevich in a "no costs to taxpayers" deal that would rob the city of millions of dollars in property taxes and possibly extend the already corrupt TIF franchise to include siphoning off sales tax receipts from general revenues. The plan's backers are 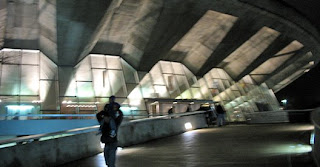 suggesting that the teeth be removed from Wrigley's current landmark designation so as not to get in the way.

Outside of Chicago, there's the Gunners Mates School at Great Lakes, the stunning blue glass-walled structure that was Bruce Graham's first design, and Max Abramovitz's iconic flying saucer-shaped Assembly Hall at U of I Champaign-Urbana. Lesser known endangered discoveries include the steel through-truss bridge over Spoon River, of poet Edgar Lee Masters fame, in Fulton County, and Dutch windmill-inspired The Mill in Lincoln, Illinois.

Check out the full list - with much more information and lots of great pictures here.

Landmarks Illinois people are creepy. They should try including a few architects in their discussions about policy. And they should stop cheating on their taxes and admit that they are in gross violation of tax exempt status rules.