The Wrigley Company is Dead! Long Live the Wrigley Building! 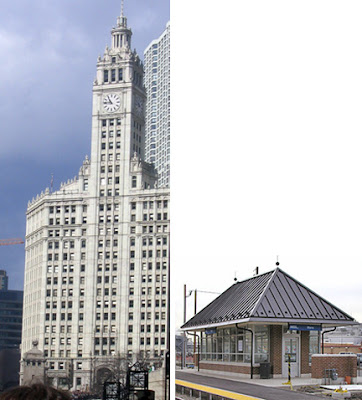 It may shock some people to learn that the 1921 Wrigley Building, arguably one of Chicago's half-dozen most recognizable buildings, has never been afforded official landmark protection. The argument has always been made that the Wrigley family, throughout the decades, has been a responsible steward for a structure that, like Marina City, has become a symbol for Chicago throughout the world.

And they have. Just as, for over a century, the William Wrigley Jr. Company has been a bedrock component of Chicago's economy and culture. But in today's hyper-volatile, hyper-scaled, aggressively globalized world, all that can change in a snap of the fingers.

And it just did. Only six years ago, in a failed attempt to acquire much larger Hershey Foods, Wrigley muffed its chance to be the fish that swallows, and on Monday became the fish that gets inhaled, agreeing to be acquired for $23 billion by Mars Inc.

As always in these things, all parties are insisting nothing much will change. Wrigley will retain a major autonomy in its operations and a strong Chicago presence. And that may be true. Less than three years ago, the company opened it news $45,000,000 Global Innovation Center on Goose Island, designed by Hellmuth, Obata and Kassabaum. Yet the lesson of corporate history is that companies seldom pay $23 billion for an asset without succumbing to the itch to tinker and streamline in search for the best possible return on its sizable investment.

So, while continuing to ascribe to Wrigley/Mars nothing but the best of intentions, the time has come to ask for a small token of good faith.

Even though, as a private company, Mars is insulated from the stock market's ruthless appetite for uninterrupted good news not just quarter to quarter by seemingly moment by moment, no corporation is immune to an economic ethos in which a beloved building, considered a prime asset for nearly ninety years, can devolve, almost overnight, into a redundant white elephant, suitable only for cashing out the value and purging it from the books.

The time to begin the landmarking process is now.

The first thing I thought of when I heard about the Mars takeover of Wrigley was, "So what happens to the Wrigley Building?" I feared only for its name because I didn't realize the building itself didn't have landmark status. Thanks for bringing this to attention.