Schindler's Houses at Facets this Sunday

A film by Heinz Emigholz, Schindler's Houses, will play for one performance at 12:30 P.M. this Sunday, April 13th, at 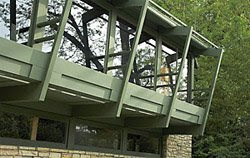 Heinz Emigholz, the premier purveyor of architectural oddities (D'Annunzio's Cave; Goff in the Desert), offers a stunning portrait of urban Los Angeles through the houses of Austrian-American architect Rudolph Schindler. Using no voiceover, archival photos, or other conventions of standard documentaries, the film presents beautifully composed shots of 40 of Schindler's houses in the order in which they were built. . .