Prince of the High C's

I'm as much a sucker for Wagnerian gloom and blood-and-lust Puccini as the next guy, but sometimes its ok to settle back and realize that, as Harry Carey might have said had he chosen a radically different career path, there's nothing like fun at the old Opera House. 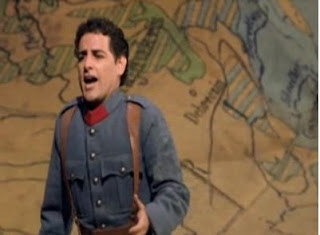 in New York as they take in the new production of Donizetti's La Fille du Régiment with Natalie Dessay and tenor of the moment Juan Diego Flórez. The role of Tonio is the one Luciano Pavarotti, in a production with Joan Sutherland, rode to superstardom in the 1960's, and now Flórez appears to be following in his footsteps, firing off a succession of nine high C's in the aria "Ah! Mes Amis", like a string of firecrackers, not just once but, at the roaringly appreciative audience's command (and Met impresario Peter Gelb's collusion), in an encore, as well. In the New York Times, Bernard Holland's review includes links to recordings not only of Flórez' "Mes Amis" (with encore) from Monday night's performance, but a video, as well, plus Dessay's sparkling account of "Salut à la France'. For a more irreverent take on the spectacle, check out Opera Chic's reports, including mid-performance posts from her Blackberry, here, here, and here.

This coming Saturday, April 26th, you'll be able to hear the performance at 12:30 P.M on WFMT, 98.7, and see the whole thing in HD at over half a dozen Chicago area theaters, with an encore performance for Sunday, April 27th at 2 P.M.

Here's the whole Flórez Mes, with ovation, from the Vienna Staatsoper, April of 2007.

And finally, to top even that, here's a performance (forgive the buzz) from the incomparable Alfredo Kraus, whose appearances at Lyric I was too much of a dunderhead to seek out. Even in his mid sixties, Kraus nails the high C's and sings with the same clarion, crystalline beauty that was the hallmark of his art. He was the real thing.