Uptown Theater Rots as Rival Promoters Battle Over It's Future

In this past Sunday's Chicago Sun-Times, pop music critic Jim DeRogatis has a terrific account of the tangled story of efforts to save the 4,300 seat Uptown Theater. For years after its 1981 shuttering, it was the palace that no one wanted, trashed and decaying under the ownership of a succession of leading slumlords.

When it became known, several years ago, that not one, but two major concert 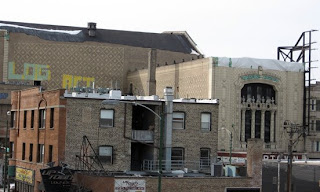 promoters, local Jam Productions and national Live Nation, reportedly had the hots for acquiring the historic venue, it looked like a can't lose proposition that would finally lead to the Uptown's rescue. But as DeRogatis relates, the theater's situation has only become more complex and troubled, with even the fact of who now actually owns the theater being far from clear. Charges remain that Jam may be effectively sabotaging efforts to save the Uptown to quash competition to its bookings at the nearby Riviera and Aragon, an allegation the company denies. Live Nation has retained the clout heavy law firm of former mayoral chief of staff and current park district president Gery Chico to plead its case in court. DeRogatis clings to an optimistic stance that the Uptown's restoration "has the potential to remake the Chicago concert scene." Current estimated cost to bring it back? $45,000,000, and counting. Read it all here.

Want to see what the Uptown looks like today? Via a tip from the indefatigable Lee Bey's Urban Observer blog, check out 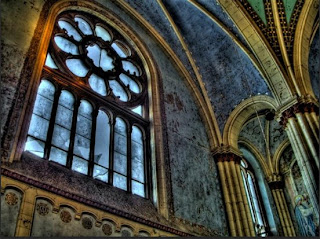 the work of photographer Carey Primeau, a sampling of which can be found on Primeau's Neglected Beauty website. In one photo, you can see the Uptown's grand foyer, even after all the neglect, is still a stunner, but in a second shot, you can see another of the theater's sweeping stairways overtaken by rot. Among Primeau's other photo subjects is the abandoned St. Boniface Church in East Village. Almost five years after I wrote about an architectural competition held by the Chicago Archdiocese to find new uses for the historic building, nothing has been done. The building remains empty and deteriorating, but, as you can see from Primeau's photo set, it still retains a stunning beauty.

Primeau's photographs are the subject of an exhibition opening this week: Carey Primeau: Neglected Beauty, at the Tapestry Center, 3824 W. Irving Park. The exhibition opens with an April 11th reception at 7:30 P.M., and thereafter will be on view, Saturday only from 9:00 A.M. to noon, or by appointment.

Could the Chicago Children's Museum be relocated here?

Shame on Jam. They have not spent two nickels on the Riv.

As an Uptown resident and activist, we're all excited that finally the Uptown Theatre may be brought back to life as the centerpiece of the Uptown Entertainment District.