Once upon a time, in a world where millionaires were as numerous as the apples on the trees, and the market for high-end condo's as inexhaustible as the very heavens, 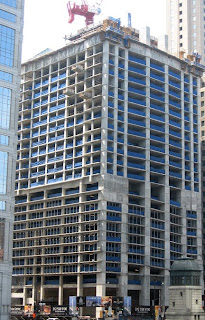 there was Shangri-La, an ultra-luxury hotel that was meant to anchor Waterview Tower, a 90-story skyscraper raising along the south bank of the Chicago river at Clark Street.

It was a beautiful dream, but one whose ending may be anything but a fairy tale. As reported by Chicago Sun-Times real estate columnist David Roeder last week, the project appears to have run aground, and construction on the site may soon simply stop.

Roeder cites the usual reasons for this sad state of affairs - the failure to line up $320 million in financing in an increasingly tight credit market, a slew of liens placed against the property, etc. , etc., etc. The usual safe, rational explanations. But may I suggest a more primal, even occult, source for this reversal of fate?

Not that very long ago, where the Renaissance Hotel now stands, there was another Shangri-La, at 222 North State. According to Cinema Treasures, it began as the Rumba Casino, but by 1944 had become the Shangri-La, a Polynesian restaurant, with suitably exotic decor. After the restaurant closed in the late 1960's, the building with the oriental-styled canopy kept its name but became a 482-seat theater, where the exotica was now to be found in the names of the soft-porn films, such as Bedroom Fantasies, Aroused, and Danish Love Girl, that became its new bill of fare. In 1981, "progress" smashed the Shangri-La into rubble. Did its tortured exiled spirit linger along Wacker Drive, finally to avenge itself on the presumptive tower a block and a half to the west that sought to appropriate its name?

You be the judge. In 1955, just to the west of the Shangri-La, a massive 12-story high parking garage was erected. It's open floors and wire retainers led the building to become known as the "birdcage." See how it looked it here. Open it up in a separate browser window. Now compare it to the photo of the current stubbed state of the Waterview tower, which Roeder says may be converted to a parking garage until such time, if ever, that economic conditions arise that would support the completion of the original tower.

Notice the resemblance. Coincidence? Perhaps. Or was Waterview the cold, beautiful trapeze artist Cleopatra, flying high above supposed Freaks like the evocatively named soft-porn house and neighboring garage, regarding them with such cruel disdain as to invite a banished anima's revenge, ending in retribution, mutilation and humiliation: "One of us. One of us" ?

The link to the Roeder article is incomplete, needs an h to make http and then the link will work.

Lynn, can we please focus on some good news for once... and could you investigate a bit further before announcing your doom & gloom...

sorry, here is the link:

The developers of Chicago's Waterview tower, a 90-story hotel-condominium skyscraper that appeared to be in financial trouble last week because of the credit crunch, said today that they now have construction financing that will allow the project to move forward.

Last week, the Chicago Sun-Times reported that construction on Waterview tower, which has reached the 26th floor, might temporarily stop because of the credit crunch. The project is now expected to be completed by mid-2010, the news release said.

Teng is the tower's architect and engineer as well as its developer. The project is located at 111 W. Wacker Dr.