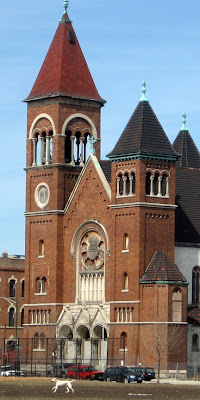 In Rome, old churches are sacred repositories of a continuum of spirituality. In Chicago, they're a real estate play.

Although the Chicago Archdiocese has come a long way from the of rank corruption of the time of John Cardinal Cody, the manner in which it runs its real estate empire remains an amalgam of arrogance and common avarice. Over the past decade, it has begun wrecking closed churches without a demolition permit, and came within a whisker of destroying the beautiful 1923 St. Gelasius on the South Side. [NOTE AND CORRECTION: the original version of this post included this sentence: "It did everything in its power to sweep away every last stone of Holy Family, the pre-fire church on Roosevelt Road that is one of the keystones of Chicago's cultural and spiritual history," A sharp eyed reader wrote to remind me that it was not the Chicago Archdiocese, but the Society of Jesuits that held title to Holy Family and had sought its demolition. We apologize for this error.]

Now it's the turn of St. Boniface, the iconic church at Chestnut and Noble whose towers have defined the skyline of Chicago's West Town neighborhood for over a century. After leaving St. Boniface to rot for nearly two decades, all but unsecured against the ravages of squatters, weather and decay, the Archdiocese has sent out a letter announcing demolition will begin on Friday. If everything goes on schedule, by March 23rd all traces of St. Boniface will be obliterated from the Eckert Park site it has anchored since 1902. 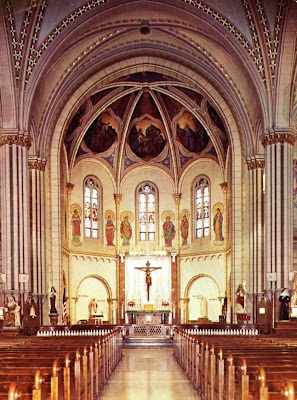 A 2003 Archdiocese competition for ideas for the church's reuse appears to have been little more than a sham. When the adjacent school building was demolished a short 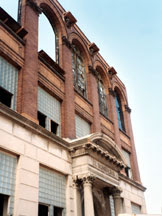 time later, the Archdiocese deflected criticism by saying it had placed the facade into storage to be reused in redevelopment of the site. What do you think are the odds that facade will ever be seen again?

The Archdiocese has rebuffed all efforts to save St. Boniface, including an ongoing campaign by the Coptic church to acquire it. Back in June in 2007, the Chicago Journal reported that the Archdiocese sent out a letter stating it was "too late to begin negotiations" with the Coptic Church, yet it would be more than a year later, September of 2008, before it sent out a request for proposals for the property.

The demolition timeline, itself, raises questions. The Chicago Journal reported that the Archdiocese filed for a demolition permit last December 5th. Because St. Boniface is rated "Orange" on the Chicago Historic Resources Survey for possessing potentially significant architectural or historic features, this would invoke an automatic 90 day hold on issuing the permit - for consideration of whether it qualifies for landmarking - that would push back doomsday to at least March 5th, but who knows? Perhaps the frequently supine Commission on Chicago Landmarks has already issued a ruling decreeing St. Boniface disposable. See if you agree. 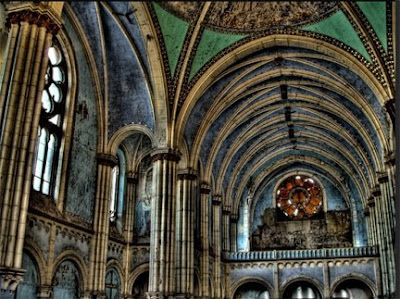 photograph: Cary Primeau
Look at the photos accompanying this post, and here, here, and here. What do you think?

Again according to the Chicago Journal, in 2005, the Archdiocese estimated the cost of stabilizing the building at $6 million. In the fall of 2008, a spokesman told the Journal the figure would be $10 to $12 million. Only months later, in December, that same spokesman was telling the Chicago Tribune it couldn't be done for less than $25 million.

The website of Saint Boniface: A Community Concerned, representing activists seeking to block demolition of St. Boniface, has raised the alarm about St. Boniface's impending doom, urging calls to the local alderman, Walter Burnett, at 312-432-1995.

But the fix would appear to be in. Barring a last-minute reprieve, a century of history will soon be wiped from the earth, the character of a neighborhood decimated for a cookie-cutter condo development, or, perhaps more likely in our uncertain economic environment, a vacant lot, a suitable monument to the profane transgressions of a sacred institution. 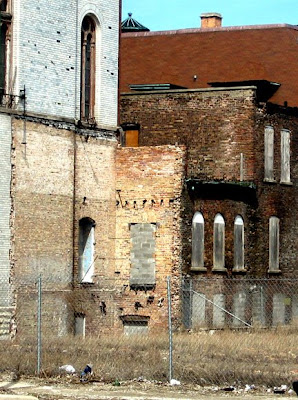 Thanks for bringing notice this issue. In the past I have played softball at Eckhart Park. From What I understand, Eckhart is to be closed for to rennovate the fields, which were in pretty poor condition. I wonder if there is any connection.

I've often walked by St. Boniface and thought it was a shame that such a beautiful building was in such disrepair. It is nice to finally see what it looks like on the inside.

The Archdiocese has no shame. Neither does Alderman Burnett, who has done nothing to try to save this church.

The same goes for Mayor Mumbles. Let's hope that Preservation Chicago and its volunteers are working hard on this one.

Also, let's hope the local groups (e.g., the Eckhart Park group and the East Village Association) do their jobs and lambaste Burnett and the Daley administration.

Give the Archdiocese money, that's what it all boils down too,I walk by it and I still pray in front of the Church.I went to grade school and was a parishoner util it close in 1987..and I feel in my heart that it still can be saved.

Hmm..weren't the same guys involved in a plot at St. boniface connected with Scholl Hospital?

Anyone smell a rat in the rectory? or maybe the chancery?

This is infuriating. Perhaps the Coptic church doesn't have the resources, but there's no evidence that they've even been negotiated with in good faith. The thing that is especially infuriating is that the Diocese claims the property is 'theirs'. Didn't Chicagoans--our grandparents and great-grandparents--pay for its construction with their donations and weekly offerings? How dare they!

"Jimmy Lago the first lay chancellor of the Catholic archdiocese of Chicago…the best Democratic precinct captain Eddie Vrdolyak, who was the county chairman, ever saw: the man who runs the archdiocese--."

I wish someone would investigate this!

My heart goes out to those whose lives are intimately connected to St. Boniface.

It is terribly sad that such a beautiful and historic building should suffer such a fate.

But I can't help but say that the conspiracy theories and condemnation of the Archdiocese that I'm reading on your comments page will not save St. Boniface.

If the city wants to step in and make a deal, say in the form of a land swap in order to take over and landmark the building, that might be a win/win solution. Of course that would take money which the city does not have.

The Church's mission first and foremost is to serve the spiritual and physical needs of people, not to preserve buildings.

It is an indisputable fact that the Archdiocese simply cannot continue to keep up all the churches in the city that have diminishing congregations. Parish consolidation is a heartbreaking but necessary fact of life.

To suggest that avarice is behind their decision to demolish the building is simplistic and misguided in my opinion.

The Church has every right to go for the best offer in order to continue to best serve the people of Chicago.

Believe me if I had the money I'd make them the best offer to save St. Boniface.

thanks for the thoughtful comments.

here is where we disagree:

the church is about buildings, and they are responsible for them.

as you well know, the earliest Christians worshipped in catacombs. they had no need of great cathedrals to sustain their faith.

in later times, right through to historic Chicago, a great, beautiful church did become a testament to the parishioners' faith. to then say, when times get bad, that the buildings are not important, is disingenuous.

if you create something of lasting beauty, you are responsible for it. you don't get to throw it away as if it were yesterday's laundry and walk away.

Christianity spans the millennia. Eternal Rome is filled with beautiful churches that are only marginally used, but are lovingly preserved as monuments of faith across the centuries.

The Chicago Archdiocese can scarcely see across the decades. If eviscerated congregations were allowed the be the final arbitrator, Old St. Pat's, which was down to a handful of worshippers not long ago, would have been dust, instead of one of today's most vibrant parrishes. And it is one of the vibrant in no small part due to the continuity of its history expressed through its rich architecture.

Things change, but the Archdiocese sees change going only one way, and washes their hands of the historic responsibilities by making their abandonment and destruction a cold real estate decision.

No one envies the Archdiocese's challenges as one of the largest landholders of historic - and aging - buildings. But they can't have it both ways, declaring that a great, beautiful church that is an essential part of worship and extension of deepest spirituality suddenly becomes worthless and disposable the moment the economics turn unfavorable.