Out of Adversity: Diversity? Lifting the Plague of Bank Branches 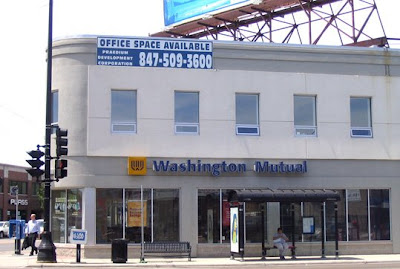 One of the caustic urban side effects of the last decade's irrational exuberance was the way competition among superbanks, clamoring to stake out a national presence, created an explosion of new branches that descended onto the retail streets of America's cities like locusts.

The upside was that this was usually accompanied either with new construction or the major rehabbing of the buildings in which the branches were placed. The downside was the way financial institutions threw money around like drunken sailors early 21st century bankers, driving out long-term local businesses unable to match the elevated rents the banks were willing to pay. Retail Traffic has reported that at their peak, banks were paying 30 to 40% over the going retail rental rates. It was not uncommon to find bank branches taking over two or more corners of a busy intersection; not unheard of to find them on all four.

If you walked into many of the branches, you would find a minimum of activity taking up a maximum of space. The branches seemed to function less as functioning offices than as giant billboards whose signage was designed to suck in deposits and insinuate the brand's name into the eyeballs of as many people, in as many places, as possible.

It was a throwback to the dot.com bubble, when company after company (remember pets.com?) convinced gullible analysts that their ever increasing losses were a promising byproduct of increasing market share. With few exceptions, however, when investors reached into the supposed pot 'o gold at the end of that rainbow, they found themselves clutching only I.O.U.s and a tarring grime of debt that wouldn't wash off.

You can't see it on their polished facades, but that same tar now smothers the branches of all those failed banks. Crain's Chicago Business is reporting on Monday that JP Morgan Chase is closing 57 branches of Washington Mutual, the no-fees, no questions, no liquidity bank that was careening towards collapse until Chase acquired it. And WaMu, which had already closed 25 Chicago branches in 2008, still has 60 branches left. Imagine: 120 storefronts gone empty in a space of a couple months.

As late as 2004, as Crain's reported, there were no fewer than 2,300 bank branchs in Metro Chicago, an 82% increase from ten years before. At the start of this year, there were nearly 100,000 nationwide. Walking our city's streets, you'd be forgiven for having the impression that America's primary industry was moving money around. (And up until a couple months ago, you may have been right.)

Analysts are expecting that, in many cases, the abandoned branches will simply be taken over by surviving banks looking to expand their local presence. When a failed bank is taken over by another bank not previously active in its markets, most branches will be converted rather than closed. And many of those that are shuttered may prove tempting to national retail chains able to get prime locations at a relative bargain.

Still, with bank consolidations continuing, the branch bubble has definitely burst, and many of the closed branches will probably remain vacant. Dark windows, like broken glass, are not a good thing. Someone, a private company, the city - or Craigslist - should set up a clearinghouse to match cheap, clean, empty storefronts with entrepreneurs with fresh ideas for reinvigorating the life of Chicago's neighborhood arteries.

Near my place at Lincoln/Belmont/Ashland three of the six corners are banks and the other three are cell phone stores!

I had forgotten about cell phone stores. If only we could have every corner filled by ice cream and liquor stores, then we'd finally have something.

With ATM's, online banking and direct deposit it is amazing that the number of bank branches has been on the increase rather than the decrease. I think you are definitely on to something comparing the corner branches to billboards. Certainly there are fewer CD/record shops than there used to be because of online access to music...

Lynn-
I too, have thought about these spaces and others that are popping up like mushrooms after the rain
(that along with the ALREADY unleased spaces from the "mixed-use"Condos all over town as well!!)

Why can't Artists and Furniture Designers
(OK- I confess- I have my OWN self interests at heart!) Display their works- veritable Temporary Galleries-
on the condition that once the space is Leased-
the work will come down?
Its a Win-Win.
For the Landlord- more eyeballs are drawn to the Property,via the WIndow displays-
&,for the Artists and Furniture Designers,
some greater visibility!

i remember when that wa mu branch in the photo went up. it displaced a convenience store and forced it to move a block up the street into a dilapidated two-flat right across the parking lot from the cvs -- some pretty tough competition for a quicky-mart owner....and, of course, the city is looking to eventually demolish that two flat with tif money..

bank branches have an advantage in that the services they provide are not subject to the sales tax, so, as a result, they can pay higher rents then a traditional store can. it did get a little out of control -- it seems there are more places to store your money than there are places to spend it!

"If you walked into many of the branches, you would find a minimum of activity taking up a maximum of space. The branches seemed to function less as functioning offices than as giant billboards whose signage was designed to suck in deposits and insinuate the brand's name into the eyeballs of as many people, in as many places, as possible."

You really hit the nail on the head with this phrasing of the situation, Lynn. I didn't realize that my sentiments were precisely this until you articulated them as such. It's really one of my biggest gripes with the bank branches: they are dead space, one step above a parking garage, in my opinion. The banks really leverage their economies of scale to pervade retail spaces to an extreme and kick all of the other useful retailers out in the process...predatory renting, it would seem.

My biggest gripe about the bank branch bonanza, however, is how irresponsible their moving-in practices are: I am sick and tired of seeing all of the major intersections of our great city decimated by drive-through, suburban-style branches. The bank branch cancer has truly metastasized, too: I don't think I can walk more than 300 ft. on any given major street without stumbling upon one. So how can drive-through facilities possibly be justified? Are people really so lazy that they cannot walk 300 freaking feet to do their banking? (Unfortunately, Chicago's current urban culture is such as to render that question rhetorical.)

To make matters worse, River North, which, zoning-wise, should have one of the highest developmental densities in the city, is teeming with single-story, drive-through bank branches replete with giant parking lots twice the size of the footprint of the actual bank building on prime plots of land on. How is this allowable? No one can convince me that Chicago isn't in a position to outlaw the obscene land squandering that banks effect--they will open up shop in this city whether they can bring their horrid developmental principles with them or not.

Randall's comment about filling these empty spaces with exhibits/shopfronts with the work of designers and furniture makers - however motivated, is an excellent suggestion that could help regenerate such areas depleted by the passing of an era of inflated rents and indulgent corporate practices.
Signs of life and bespoke design are ideal antidotes to the malaise we are all feeling at the sight of those empty bank shopfronts. Thankfully the banks once had the funds and motivation to renovate and preserve some significant buildings. In many cities only McDonalds could afford the rents after the banks moved out - leaving immaculately restored heritage buildings. But the others....yes bring on subsidized rents for designers...this creation of creative design precincts does attract people to an area and stories of regeneration and life in what was previously thought of as a sterile corporate precinct. There is probably a formula for creating a successful strip in such an area of abandoned banks - as reliable as the Hollywood scriptwriter's formula....a certain number of antique and collectors stores, designers shopfronts, cafes and restaurants.And yes icecream and liquor stores why not...important parts of the formula.
Let us call the liquor store.....Enoteca - wine library.
The icecream shop....gelateria... and so on.

Let's face it what folks want to see is not just displays of craft and uniquely designed furniture, but signs of the artisans themselves, the designers at work. Workshops exhibiting the artisans at work. Sketching, shaping,doing things with models, pencils and wood. Something to watch as they eat their gelati.
Some high end architectural businesses have rooms that exhibit their model makers and designers at work..... showcasing the coolest part of their creative work - for clients to peruse and register as authentic creative design.
Design strips add some cultural capital to an area. And can be niched to the max. How about a Danish retro design precinct with danish cafes and textiles and jewellery. and so on.