A Small Colorful Victory on the Loop L

After yesterday's post and subsequent discussions about the clear plastic garbage bags in the subways, and the swell of comments supporting them, I'm almost reluctant to put up this item praising the changes at the State-Lake station on the Loop "L", fearing that you, dear readers, in the spirit of yesterday's discussion, will just reply, "It stinks!"

As Graham Garfield's invaluable Chicago-L.org website relates, the State-Lake station is one of the city's oldest, dating all the way back to 1895, and actually predates by a couple of years the completion of what has come to be known as the Loop "L". The first of many renovations took place in 1913, leaving only the outer walls of the station houses. 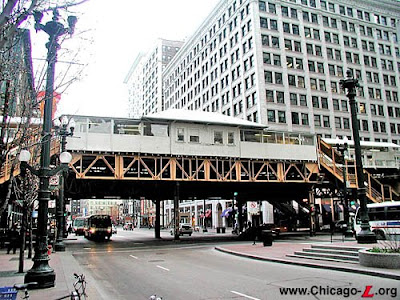 As can be seen in the above photo, stolen borrowed from the Chicago-L.org website, for over a century, those walls remained. The operable old windows of the formerly enclosed station house were a great place to take pictures of the various parades heading down State Street. 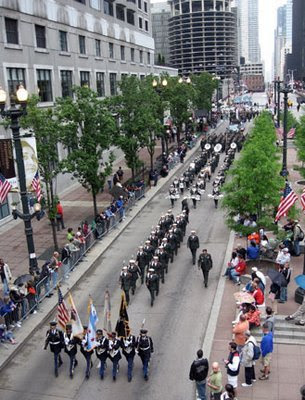 So, I was royally p.o.'d a couple of months ago to discover the north windows had been replaced with a shear wall of what appeared to be locked plywood cabinets, and was all set to express my anger in the usual splenetically crafted post. Fortunately, my talent for procrastination meant that before I wound up getting to it, a rehab was unveiled that, while trashing those 100 year-old walls, brings a new openness and splash of color to the derelict station. 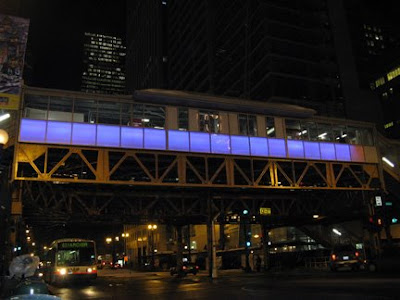 On both the north and south sides of station, there is now an almost continuous strip of window panes and, below them, another strip of light panels that actually change color in animated rotation.

No, it's not cutting edge either as architecture or art. The window strips are starkly generic, the light panels pretty rudimentary. Given, however, the abject, abandoned-in-time, flaking paint stations such as at Randolph and Wabash, the update to State-Lake is a definite civic improvement, and the cheery, sliding strips of color a welcome relief to the dark gloom of a Chicago winter. 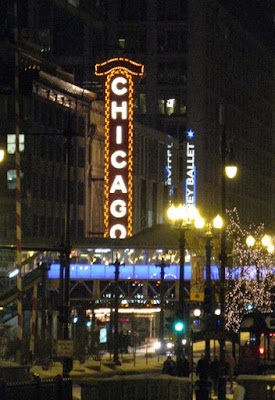 I'm glad you've mentioned this project. I worked as a engineer on the work. It was interesting that prior to the recent work, the South facade of the station had been renovated semi recently (I believe in the 1970s). The two sides were not symmetric, and the north, having not been repaired in quite a long time, was really in need of the new work. Although both facades were updated, structurally the north framing was essentially brought up to approximately the same condition as the south framing.

Personally I appreciate that the lights pay a little homage to the mini Broadway that is Chicago's theater district, even if they aren't the most impressive. I wasn't aware of the lights when I was I doing my work on the project, so I find it a pleasant surprise.

I believe in the medium to long term (Perhaps 10 or 15 years) there are plans for a complete overhaul of the station. Of course, as it is with all plans, who knows for sure what exactly will happen?

It's not the greatest thing in the world, but it's also not that bad. It will add some visual interest to State Street at night which makes it a good fit with the other electronic signs nearby.

Saw this on the Chicago Architecture Blog a couple of months ago. It's not much, but it's certainly a welcome addition. Good to see the city/CTA being proactive about public art.

it's certainly lacking any creativity, but maybe that's appropriate. the idea is nice and it does add some visual stimulation in an area that can handle it. good.