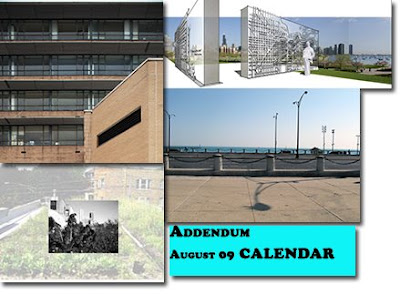 We knew it was too quiet to be true.

Turns out we've just added over a half dozen new events to the August calendar, and most of them are going on this week. You may still be able to get tickets to SOAR's annual fundraiser honoring Adrian Smith on Monday the 10th. On Tuesday, the 11th there's a critical meeting at the Chicago Urban League on the 2016 Olympics and the gravely endangered Bauhau-inspired architecture, designed in part by Walter Gropius on the former campus of Michael Reese Hospital. Also on Tuesday, the winning design by David Woodhouse Architects for a proposed Burnham Memorial will be presented at a Grant Park Advisory Council session, which will also discuss alternatives to the current closing at Queens Landing.

On Wednesday the 12th, there'll be an all day symposium on The Green Scene/Organic Networking, and in the evening, for those of you speak Spanish or can bring along an interpreter, Susan V. Webster will lecture on The Conquest of European Architecture: Native Masters and the Construction of Colonial Quito at Northeastern Illinois on the WTTW campus. Thursday through Saturday, Urban Habitat Chicago will be sponsoring a conference, Chicago 2175: Creating the Change, and on Thursday the 27th, ULI Chicago will be offering up its summer networking events.

Check out these great events - and the many others on the August calendar here.

Lynn, is there any place to see that David Woodhouse design yet? If not, I will look forward to your writings about it.

You should be able to view the David Woodhouse design models at The Field Museum starting Aug. 21.

I've added a link to AIA Chicago's page with the Woodhouse design on the post. You can also access it here: http://www.aiachicago.org/burnham/entries-phase-2.asp