A Champagne Toast to the Prairie Avenue Bookshop 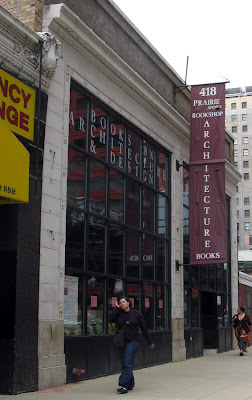 As I'm reminded every morning when I face myself in the mirror, nothing lasts forever. Not even wonderful things. Not even the Prairie Avenue Bookshop, which will be closing its doors end of business on Monday, August 31st.

It billed itself as the world's largest architectural bookstore, and who could argue? From the window of its capacious home at on south Wabash you had a great view of the Auditorium Building, Adler and Sullivan's peerless masterpiece, and within it's warm interior, so handsome it was used as Christopher Plummer's architectural offices for the film, The Lake House, you encountered an intoxicating selection of books and periodicals you'd find in no other store.

It would be cold, indeed, not to sense the sadness of the occasion. But better to celebrate that something so remarkable survived so long, going back 35 years to its original location, on Prairie Avenue next to H.H. Richardson's Glessner House, when Chicago's one-time street of millionaires was still troubled and derelict. Not only did this shaky idea for a business survive, it endured, soon moving to quarters in the middle of the revitalizing Printers Row district. Then, finally, to its present home - six times larger and offering up as much as 14,000 volumes.

And lest you be tempted to think Prairie Avenue's closing extends from overreach, consider how many bookstores Prairie Avenue has outlasted: Kroch and Brentano's just up the street, its flagship store now a false front for a soaring new condo tower. Not so long ago, there was also a Kroch's in Water Tower Place, along with a Rizzoli with an international flavor and an unparalleled selection of art books. The British-flavored Waterstone's was just across the street. The inimitable Stuart Brent held down the fort for decades further south on Michigan. Then Borders opened a superstore in the old Magnin's department store, and soon the dominoes became to fall. In short order all of them were out of business, leaving only the cockroach-like Waldenbook outposts, more like glorified airport terminal kiosks than the real thing.

In weak moments, you might imagine that Prairie Avenue might have survived if they just did more, more of something - better use of the internet, more book signings, more opening up the store to meetings. But consider this: This past winter, Borders announced that, even after driving out all the competition, their Michigan Avenue flagship wasn't meeting expectations, and was to be closed after the 2009 Christmas season. If they can't figure out to make a go of a bustling location with long lines backing up from the checkout counters, it's a bit churlish to expect that Prairie Avenue could have done better. In this dawning age of ebooks, the Kindle, and listening to best sellers being read to you by celebrity voices on your iPhone as you commute to work, the question is no longer one of the survival of bookstores, but of books, themselves.

If you haven't already, stop by on Monday. 418 S. Wabash, hours 10:00 a.m. to 6:00 p.m. All titles are 70% off. In terms of selection, all the most usual suspects are pretty much gone, but there's a marvelous sampling of interesting underdogs, their monographs finally shining brightly, now that they're out of the shadow of big brand bullies like Gehry and Wright. There's still a good collection of out-of-print titles, and of periodicals, including issues of the invaluable Prairie School Review, created by the Hasbrouck's in the 1960's. You may not find exactly the book you came to buy, but you'll likely find something unexpected that will delight you.

And so, let's celebrate a fantastic run. Not just the books, the bricks and the mortar, but the great staff, Karl and Beth Eifrig, Emily Tamblyn, and, I know, others I'm leaving out, who were always there to find the books I needed right now to meet my deadline, and, of course, Marilyn and Wil Hasbrouck, who kept the Prairie Avenue Bookshop a remarkable Chicago cultural asset for three and a half decades. What we owe them is beyond evaluation.

It billed itself as the world's largest architectural booksyore.It would be cold, indeed, not to sense the sadness of the occasion. And lest you be tempted to think Prairie Avenue's closing extends from overreach,