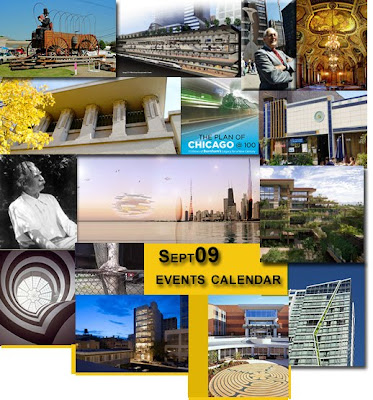 September not only sees the culmination of the centennial celebration of Daniel Burnham's 1909 Plan of Chicago, but of Frank Lloyd Wright's iconic Unity Temple, which celebrates with a gala raising funds for the building's restoration. Preservation Chicago has its own autumn benefit in the Elks Memorial. Pecha Kucha goes nuts, with no less than three events: at Martyr's, downstate, and at a new exhibition opening this Friday at the Chicago Visitors Center, Big. Bold. Visionary. Chicago Considers the Next Century, which finally gives Chicago architects the chance to bring their talents to the Burnham celebration. On Wednesday at the Pritzker Pavilion, there's the premiere of Judith McBrien's long awaited documentary, Make No Little Plans: Daniel Burnham and the American City.

Jackie Koo discusses her new Wit Hotel for Friends of Downtown, also on Thursday, and gives a tour for the IES, Chicago Chapter. The School of the Art Institute launches an ambitious lecture series with Kathleen James-Chakraborty and Narelle Jubelin. CAF welcomes the authors of Beyond Burnham at a lunchtime lecture, and hosts a talk by Pamela Bannos on the old Chicago city cemetery, whose residents were forcibly relocated to create Lincoln Park. The Chicago Central Area Plan, the restoration of the Guggenheim, a Glessner House celebration of the life of Leon Despres, IDOT capital spending, David Hovey, Jens Jensen, and a historic pub crawl (pickling: my kind of preservation). And, as they say, much, much more. 60 great events and growing. Check them all out here.