Goldberg's Marina City, only through Saturday the 29th at ArchiTech Gallery 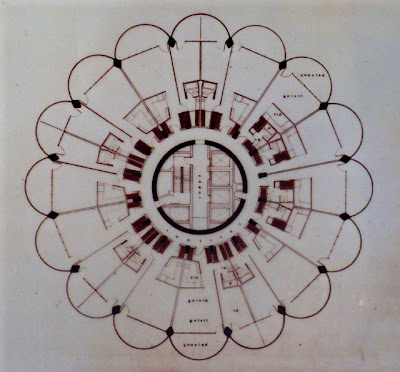 A reminder that the ArchiTech Gallery's current show, Marina City: Bertrand Goldberg's office materials for the design of Marina City is entering it's final weekend, closing after Saturday, the 29th.

It's a small show, but with some fascinating stuff. There are original blueprints, and detailed drawings of the original design for the complex's theater, now the House of Blues. There's a proposed project from late in Goldberg's career another major residential complex at Grand and Lake Shore Drive, two matching towers, set atop two podium cubes united with by a ribbon of glass and sharing, like Siamese twins, a central spine. The rendering, which ArchiTech's David Jamison speculates may have been done by longtime Goldberg associate Ben Honda, is colorized in a way that makes it look like a collaboration with R. Crumb. 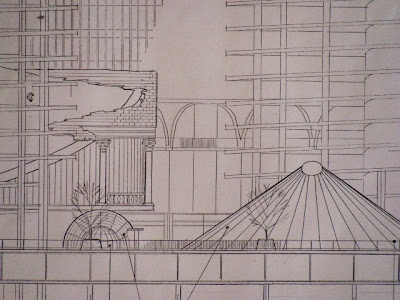 Equally fascinating are Goldberg's 1995 ideas for updating Marina City and converting the theater to the Chicago outpost of the House of Blues. Goldberg did not get that commission, and Jamison believes that an increasingly unsatisfactory relationship with the complex's then new owners may have resulted in Goldberg taking out his frustrations by giving the owner's exactly what they wanted, including a new classical front for the House of Blues, with gigantic Corinthian pilasters along Dearborn street, and a neo-classical bridge running from the theater to the office building that was being retrofitted as the House of Blues hotel.

There's also a large escalator, clearly marked "bowling", running from the moat along State Street up to the plaza level and the entrance to the bowling alley. It was actually was an interesting idea to deal with those moats, part of the original design along State and Dearborn streets that insulated the complex from what was then a very rough and tumble surrounding neighborhood, but now serves only to isolate it from a newly vibrant River North, functioning primarily as a smoking refuge for Smith & Wollensky waiters. 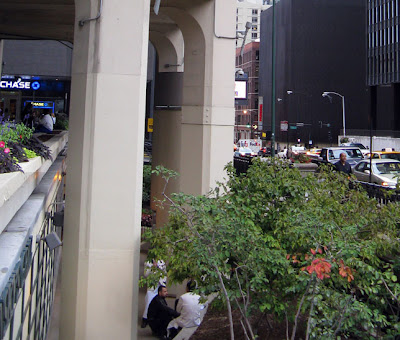 On the ArchiTech Gallery website, there's also a link to a great lecture Bertrand Goldberg gave in Edmonton, Canada in September of 1959, long before Marina City's construction actually began, in which he explains the ideas behind his revolutionary project.