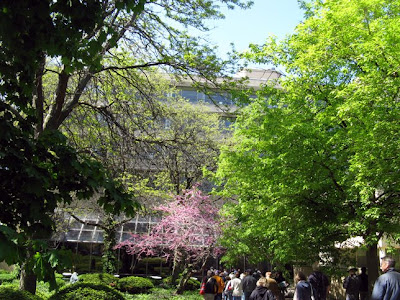 As time runs out on the historic Bauhaus-inspired campus of Michael Reese Hospital, designed with the direct participation of architect Walter Gropius, the Commission on Chicago Landmarks will consider the fate of the campus at its regular monthly meeting, taking place today, Thursday, August 6th, at 12:45pm at City Hall, 121 N. LaSalle Street, Room 201-A. It is open to the public, and those supporting Chicago architecture are encouraged to attend and to speak out. What's at stake?

Well, the staff of the Commission on Chicago Landmarks does incredible work in researching, documenting and saving essential Chicago architecture. In a rank conflict of interest, however, they are a subsidiary of the Department of Community Development - the former Department of Planning - whose job is promote development, under at the administration of mayor Richard M. Daley, blindly and at almost any cost. The actual commission is a body of well meaning, distinguished Chicagoans appointed by Mayor Daley to make sure that the landmark process is never allowed to become an inconvenience to those plans, no matter how ill-advised.

As a consequence, the Commission has mostly been a rubber stamp, missing in action, on the most contentious and important landmarking issues. In the case of the Farwell Building, it willingly played into the hands of people like Albert Hanna - who's recently got the landmarks law ruled unconstitutional by a hack political judge - when they voted that they saw no difference between a landmarked building, a completely different building constructed on the same site, and the stripped facades of the original landmark pasted onto the new building. The decision was justified as an "exception", but in the law, there are no exceptions, only precedents, and the Farwell vote opened the floodgates to eviscerating the very concept of landmark protection.

Now they're considering Michael Reese. Not because it's right, but because they were forced to. Grahm Balkany, the dedicated scholar behind the Gropius in Chicago Coalition who has been working overtime documenting the Gropius connection to Reese and lobbying tirelessly to save this irreplaceable piece of Chicago's cultural and architectural history, submitted a nomination of Michael Reese to the National Register of Historic Places, which the Chicago commission is forced to consider. 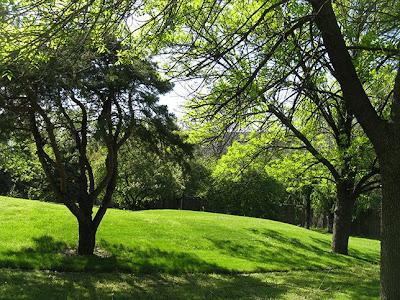 This is another critical vote that will determine whether landmarking will have any meaning in the face of Mayor Daley's Olympic obsession. In the mayor's mind, the 2016 is the highest possible good, and he will ruthlessly sacrifice and destroy anything that stands in his way. We've written extensively about the importance of the campus and its buildings, more recently about how all the memorial plaques throughout the campus have disappeared, as has an important sculpture by Richard Hunt, quite possibly to be sold for scrap. Only days ago, we posted on how the wonderful landscaping on the campus by Hideo Sasaki and Lester Collins has been wantonly destroyed to no good purpose.

If the landmarks commission does not take a stand today, they will be putting their stamp of approval on such destruction. No park, no building, no cityscape will be safe from Daley's scorched earth plans. Where will their loyalty lie? Blindly, to the man who appointed them? Or to their charge as the last and most critical protectors of Chicago's incredible architectural legacy?

Kudos to Grahm Balkany for working so hard on this issue.