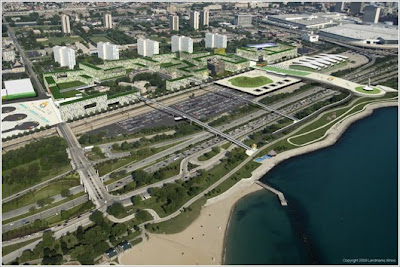 This morning, preservation group Landmarks Illinois released an alternative plan for an 2016 Olympics Village on the former Michael Reese campus that would save what the group calls "six of the campus’ most viable historic buildings for re-use, reintegrates the area’s street grid, saves significant landscaped areas, and retains the required amount of Olympic Village housing to meet the requirements of the International Olympic Committee (IOC)."

We'll be writing more about this after we have a chance to review the proposal more thoroughly, but you can check it all out for yourself here.

That webpage quotes Landmarks Illinois President Jim Peters as follows: “We believe this plan offers a more sustainable approach, not only for the Olympic Village but for a more viable neighborhood after the Olympics. By reusing the most adaptable historic buildings—just six of the 29 structures now scheduled for demolition—we think this will result in a more balanced approach for community development.”

“Our organization is supportive of the city’s efforts to bring this important event to Chicago. This is why our plan incorporates all the necessary and critical elements identified by the IOC for the Olympic Village. Even though a decision on the Olympics will not be made until October 2nd, we felt it was critically important to put this plan on the table now, if only to stimulate alternative ideas before the project gets underway.”

This is a major development in the fight to save the best of the Bauhaus-inspired architecture at Micheal Reese. Again, there's a wealth of information - and images - on the proposal here. 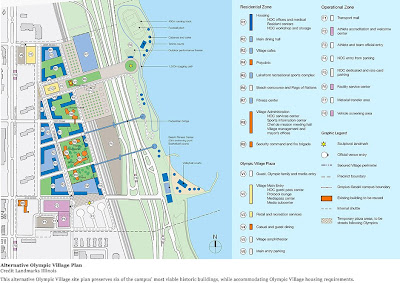 I like the fact that they advocate for preserving the bridge over 29th Street. However, they leave out three pre-modern buildings, i.e., the Rothschild building, the Meyer building, and the Mandel building. (Lynn, could you check the names of these buildings?).