ArchitectureChicago Plus: The Year in Review 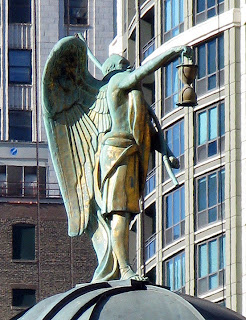 2010 started on a deceptively strong note with January 1st.  When the 2nd and 3rd followed in quick succession, analysts began to see this as a return to stability, until the disaster of January 5th, which followed the 3rd.  An amber alert was issued for the 4th, which didn't show up until sometime after the 12th.  By this time, the 6th and the 9th had also gone missing, only to show up after the 13th and 16th, respectively.  A clear pattern was emerging, but by the time the 27th and 30th were due to reappear, it was already February, and hopes for finding them faded.

The beginning of February was labeled "The Great Calming" as days again followed one another in more or less numerical order, with only a slight bleeding of alternative Tuesdays into the early hours of the next day.  Then came The Great Panic of the 28th, when it was discovered the month had officially run out of days, running nearly 8% behind the yearly average for months.  Congressional Republicans immediately called for an investigation, as well as for making the Bush tax cuts permanent and providing the top 2% of earners the indentured service of the first born of every family receiving unemployment benefits.  "A calendar in deep deficit," said Senate Minority Leader Mitch McConnell, "is no time to be penalizing those most capable of exploiting their fellow Americans."   In response, House Speaker Nancy Pelosi proposed adding thirteen weeks to July so that the chronically unemployed would at least have more warm weather.

While many saw March as a return to normalcy, former Alaska Governor Sarah Palin attacked President Barack Obama for a 31st day she claimed "was made up out of thin air.  In Alaska, we don't need all these days.  We just make each one last forever."  When April wound up having only 30 days, liberal democrats assailed Obama for selling out.

Locally, May 14th was seized by Richard M. Daley who said he would eventually make it a park, while Chicagoans arriving at the 17th found it demolished.  "We had no choice," declared the Mayor.  "Druid calendar addicts were squatting inside.  It had deteriorated so bad it would have cost fourteen days to save it.  I know that.  You know that.  Everyone knows that."  Later, Daley sold two weeks in June for the next 300 years to a consortium headed by Morgan Stanley.  City Council Finance Chairman Ed Burke said it was "a great gift to the people of Chicago",  as the 19th somehow made its way into his already massive campaign fund.

Panic threatened again in July as speculation ran rampant that China would not loan the month back to the United States.   In the end, China's Great Giving of Rope to the Capitalists campaign saw the return of July in exchange for its weight in 52-week Treasury Bills.

I don't know what happened in August.  I was out of town.

In September, rumblings became a groundswell as Tea Party members campaigned to "take back our calendar."  Senate candidate Rand Paul called for the abolition of the Federal Bureau of Weights and Measures.  "Get government out of the calendar," Paul declared, "and there will be no more premature nightfall's.  No more eclipses.  Give the calendar back to the enormous generating power of the Free Market and watch the days pour in."  In Maryland, Christine O'Donnell decried what she called "the hidden influence of the International Date Line."  Senate Republicans successfully filibustered Democratic attempts to more tightly regulate the calendar.  "When the average hard-working American," said  a crestfallen Senate Majority Leader Harry Reid, "doesn't know whether the weekend will be there for them, or whether it will be outsourced to some third world country willing to go cheap on the number of hours in the day, I think a stronger oversight is in order."

And in the House, John Boehner cried.

October saw the 23rd and 24th being taken hostage by an armed Postal worker holed up in an Encino 7-Eleven, who threatened to shred them unless the 14th starting talking to him again.  The 14th told police that she and the gunman were never more than casual acquaintances, but that he had become obsessed with her after deciding to hide all of his mail from that date in his bathtub rather than have to deliver it.  A SWAT team called to the scene was finally dismissed as both the 23rd and the 24th escaped their captor after he passed out from eating too many Burrito Rollers.

In November, Glenn Beck held a rally at the National Mall, "We're screwed.  And Here's How We're Going to Fix it."  Drawing on the work of the late Belugan economist Arthur Caviar, Beck sketched out on a chalkboard how the calendar could be saved by changing the odd numbered days to even numbered days, and vice versa.  And then he was distracted by a ball of string.

The year, of course, still has another 11 days to go, but we may be looking at a sunnier future.  So far this month, the worst thing to happen was when, again, several days were thought to be lost.  Last week they were discovered in a crawl space under Rahm Emanuel's house.

Optimism appears to be on the rise that 2011 will actually be the year following 2010, although leaders in Washington on both sides of the aisle are already expressing concern over rumors that China will be rolling out its own, alternative New Year, possibly as early as February.

Re the pic: my favourite clock in the world.

Re the post: my favourite recap of this year. Or any year.