A house is just a pile of stuff with a cover on it.

photograph: Wikipedia, Maryland Pride.  click images for larger view
What you buy is who you are.  And the more you want to be - or at least be seen as being - the more  stuff you need to have.  You can't throw anything away; you can never be sure when you might need it again.

George Carlin used to say we keep accumulating stuff until we finally have no choice but to change houses: we need a bigger place for all our stuff.  From 1,400 square feet in 1970, the average home size increased almost 70% by 2008, to 2,629 square feet.  A similar trend took place commercially.  We went from Ma and Pa food stores, to supermarkets, to superstores, to food superstores within mega-retailers that have so much to sell they need a warehouse to sell it in.  Shopping carts have grown to the size of a wire frame freighter.

A major accompanying force in all this has been the emerging dominance of a global supply-chain economy, in which a relentless drive for lower prices and greater efficiency is dependent every step of the way on eliminating jobs, reducing wages, and increasing uniformity.

The recent economic crisis has cut two ways.   Macro, it's the supersize model.  The focus on low prices has accelerated an increasing share of the economy falling under the control of an ever smaller handful of corporations, whose massive size makes competition from entities lacking their scale unsustainable.

Shopping malls shrink and die.  Shedding departments until they're little more than clothing outlets, department stores cede universality to the superstores, cutting their reason for being out from under their own feet.  Borders and Barnes & Noble drove the independent bookseller chains  out of business; now they seek a last desperate mutual embrace as Amazon pushes them  toward their final annihilation.  The corporate behemoths now grow by scaling down, a final mop-up of urban streets with mini-Walmarts.

In our personal space, however, we're being downsized.  Under pressure from the mortgage meltdown, the average home size dropped to 2,438 square feet, the first decline in three decades.  In our workplaces, the reduction is even more dramatic.  In the 1970's, businesses budgeted 500 to 700 square feet of space per employee.  According to a L.A. Times report, it's now down to 200.  One analyst predicts it will drop to just 50 square feet by 2015,  as the average for cubicle workstations has declined from 64 to 49 square feet in just the past few years.  Think thin.

So what happens to us?  More importantly, what happens to all our stuff?  Technology is taking care of a large part of a problem.  CD's, DVD's, bulky books and the furniture needed to store them evaporate into thin air as on-line downloads come to dominance.  Even as televisions get bigger, they get thinner - just a slight bump on your wall.  We're having fewer children, and the ones we have now come in easily stackable configurations.  Our pets are now being bred foldable so they can easily be stored when not in use.

Seriously, though, how can anyone live in a thousand square feet?  Japan may be way ahead of us.  Kisho Kurokawa's 1972 Nakagin Capsule Tower in Tokyo consists of thirteen floors of prefabricated 8 x 12 modules, each with appliances, cabinets, bathroom, and bed.  The city's contemporary capsule hotels take it a step further.  For just $30.00 a night, you get a bed, TV and radio in a stacked compartment about the size of a large dog kennel.

But again we ask:  where's the room for your stuff?  Is it possible that old scoundrel, Frank Lloyd Wright, may have gotten it right almost a century ago?

Mary Louise Schumacher, who's taken over the Milwaukee Journal-Sentinel's architecture beat from the redoubtable Whitney Gould, has a a fascinating, first-rate article, Frank Lloyd Wright, big ideas for small homes, about the six Milwaukee houses that were prototypes for the American System-Built Homes, Wright's effort to create attractive affordable housing.   All seven models were standardized to allow for precut lumber and reduced labor, keeping the price as low as $4,000.

Schumacher relates how a small hardy band of volunteers recently purchased three of the now endangered properties in what is now called the Burnham Street Historic District. They've restored one of the bungalows and are fighting to raise the funds necessary to save the rest. 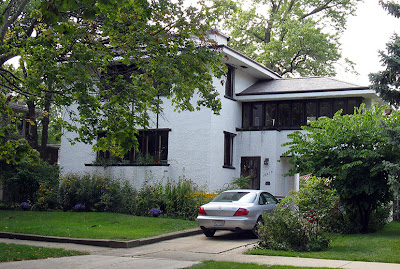 Chicago has it's own System-Built Homes, two of them, both designated landmarks - including the Guy C. Smith house, pictured above - on South Hoyne Avenue in the Beverly neighborhood.  According to the AIA Guide to Chicago, they were constructed without Wright's supervision.  Like their Wisconsin counterparts, they were built by Milwaukee's Richard Bros., who went so far as to hire as their copywriter novelist Sherwood Anderson, who extolled them as an architecture "as brave and direct as the country."  It didn't help.  According to Schumacher,  only 13 System-Built homes were ever constructed.

The homes are as small as 800 square feet, "A Small House with lots of room in it," according to a contemporary advertisement.  "Walking through the restored spaces today," writes Schumacher,  "it lives up to that promise."


At a time when architects are increasingly focused on smaller, more sober and green building, what is sometimes called micro architecture, Wright has some things to say.

Even the ventilation system, which invisibly breathes fresh air in and out, sounds an awful lot like the inventions of today’s green architects.

And, like many contemporary scaled-back designs, it challenges us. A question naturally arises: Could I live here?

. . . Clutter, too, would have to go. It would mar these spaces, which some believe are inspired by Japanese design and Wright's trips to Asia. Would the shower of interior light from clerestory-like windows be worth developing more tidy habits? It seems that it should be.

While it's always possible future events will veer off into some unexpected direction, the current morning line is that America is in for some tough times, which could have some sober reflection as a positive by-product.  The debate on sprawl rages on, but it won't be fully resolved until the final bill comes due. Most of suburbia is still coasting on the original build-out of infrastructure.  We're still waiting for the reckoning when that hyper-extended network of roads, sewers and other utilities needs to be replaced.  We may be seeing a glimpse of the future, however, in a recent Wall Street Journal report on how miles of asphalt-paved highway are reverting to gravel and dirt as cash-starved local governments are forced to cut expenses.

Cities have the benefit not only of density, but astringency.  As anyone who's shopped for a condo or rental apartment in newer buildings has found, market conditions keep the average square footage way below even that 2,400 square-foot stand-alone average.

Nor is this new.  A one bedroom in Marina City, minus the expansive balconies,  is 650 square feet.  Somehow that's enough room, however untidy, for all my stuff, but then it's just me and two cats, and they've already got a Self-Storage locker filled up with old spit-covered toys and various detritus from their previous lives.  For normal people and complete families,  could we ever even contemplate life in Wright's 800 square feet?  Or will we all eventually wind up like the Collyer Brothers, our actuarial most-likely mortal end: being crushed in a cave-in of 130  or so tons of our stuff.
(Click on time for permalink) 12:43 AM