the Graham's new mini-bookstore, Marshall Fields and Chicago Calamities, Zook, shopping for ICA, stuffing the ballot box for SAH - news notes from all over

click images for larger view
In an increasingly virtual world, the Graham Foundation is taking on a contrarian tack with the opening this Thursday, December 16th from 5:00 to 8:00 p.m., of a new "mini-bookstore" in the library of its Madlener House home.  Featured is the catalog for the Graham's excellent current exhibition, Las Vegas Studio: Images from the Archives of Robert Venturi and Denise Scott Brown, edited by Hilar Stadler and Martino Stierli.  Among the other titles available  is a new collection of ten essays by Denise Scott Brown, Having Words.  You can RSVP for the opening reception here.

Elsewhere, author Gayle Soucek will be at Borders in Evanston this Saturday the 18th at 6:00 p.m. to sign copies of her two recent books.  Marshall Field's: The Store That Helped Build Chicago takes the legendary store from it's beginnings before the Civil War through its 2006 conversion into the local outpost of Macy's.  That event does not appear to be among those covered in her other book, Chicago Calamities: Disaster In The Windy City, but its does include the 1954 seiche that sent 10 foot waves over Montrose Beach, the 1903 Iroquois Theater fire, Randy Michaels, and other dolorous happenings.  This is a good opportunity to pick up the Fields book for a holiday gift, especially since Amazon is currently listing it as out of stock. 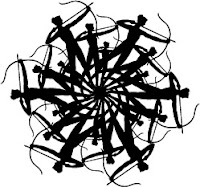 Speaking of gift-giving, you can also support the Institute of Classical Architecture & Classical America by sending them a percentage of all sales from purchases made through this special link to Amazon.Com. 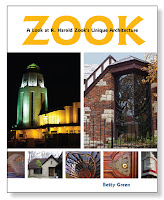 And a reminder about another new book by Chicago photographer and CAF docent, Zook: A Look at R. Harold Zook's Unique Architecture, whose career included co-design of Park Ridge's Pickwick Theatre and over forty homes throughout the Chicago suburbs in the 20's, 30's, and 40's. 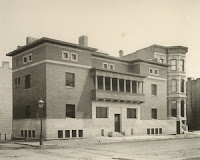 Turning full circle back to our iOS world, the Society for Architectural Historians, which makes its home in the 1891 Louis Sullivan/Frank Lloyd Wright Charnley-Persky House, is enlisting your help in winning a contest where the prize is the free development of an iPhone app for the winner.  SAH says you can vote once a day through January 28th.  Do your part to uphold Chicago's reputation:  vote early and often here.