One Year: 85 Tours - Chicago Architecture Foundation's Jennifer Lucente nears end of her odyssey; plus a unique oportunity to tour the works of Bertrand Goldberg this Saturday 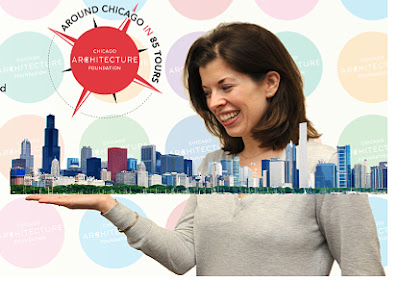 click images for larger view
It's as if Odysseus was the one who had stayed home, and instead Penelope went on Homer's grand adventure.

Chicago native Jennifer Lucente, the Chicago Architecture Foundation's Social Media Manager, took it upon herself to take every one of CAF's enormous roster of 85 tours over the course of a single year.  It began this past January 13th at the Chicago Board of Trade, and it will end this coming Thursday with the "Razzle Dazzle" walking tour of the city's theatre district, finishing at the Chicago Theater, where there will be a special reception marking the end of the project later that afternoon.

The tours have taken Lucente to every part of the city, from Pilsen to Kenwood, Uptown to Jackson Park and beyond, to Evanston, Kenilworth, and Frank Lloyd Wright's Oak Park - including the cemeteries - high and low, in all kinds of weather.    She's documented her journey on a blog,  Around Chicago in 85 Tours, tour-by-tour, with a wealth of great photographs.

It's been a clever and effective promotion of one of Chicago's greatest resources - the dedicated team of almost shockingly knowledgeable docents (believe me, I would never make the cut) who lead those 85 tours.  If you've ever taken one, you know they're not just for tourists.  Chicago's architectural heritage is so rich that (unless you're Tim Samuelson) you can never learn it all, but the informative and entertaining CAF tours give you not only a deeper knowledge of the buildings you thought you knew about, but introduce you to wonders you may never have imagined existed.

A case in point takes place this Saturday, December 11th, with a repeat of CAF's popular Architecture in the Round: Bertrand Goldberg tour.  If Mies was all about the box, Goldberg was all around breaking it, and Saturday's bus tour 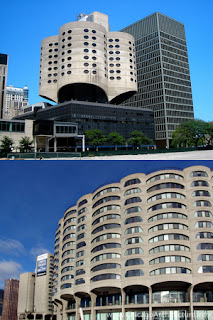 takes you to his most famous Chicago creations: the recently restored Hilliard Homes on the south side, River City, Marina City and the stunning Prentice Hospital, which everyone is fearing that its new owners, Northwestern University, will be working to demolish.  (You can find more information on the battle to save Prentice here.)

It's looking like Saturday will offer a welcome break from the recent frigid cold, so it's a great opportunity to spend a few hours seeing and learning more about some of the Chicago's greatest works of architecture and one of its most creative minds.  Architecture in the Round is only $38.00 ($33.00 for CAF and Docomomo members and students) and you can get more info and reserve your space here.

Wow! Thanks for the review! It has been an incredible journey and I can't believe it's almost over. I'm so happy I've had this opportunity to show people that it's ok to be a tourist in your own city. Especially in a city like Chicago. Thanks Lynn!

I was delighted to meet Jennifer on my last visit to my hometown, and have enjoyed following her adventures on twitter. Kudos to the Chicago Architecture Foundation and to Jennifer!

It was through Twitter and Jennifer that I became a CAF member and have had nothing but great experiences on each tour I've taken. Almost time for me to renew my membership.