The Dark at the End of the Supply Chain Tunnel 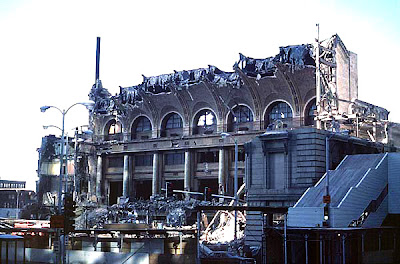 "Don't come, we can't handle it."
- a spokesman for British Airways, after 9,000 passengers on 32 International flights were left locked in their claustrophobic metal cans on the tarmac of New York's Kennedy International Airport in New York, only yards from the terminals, for up to 12 hours.

The conditions were challenging to say the least - a crippling snowstorm of massive dimension. The response? As has become the norm, a bunch of government and corporate bureaucrats pointing the finger at each other while patting themselves on the back for taking actions that did nothing to solve the problem.   Our new motto for when the going gets tough:  give up!

Airlines have drastically cut the size of their fleets to create the kind of capacity shortages that help drive up fares. At the same time, they've slashed their customer service staffs while penalizing flyers who don't e-ticket. Between the indifference of the airlines and the genital gropings of the TSA, air travel has devolved into a Pythonesque parody of treating your customers with disdainful contempt.

Welcome to the new normal.

It's no small irony that the same week that a blizzard shut down the East Coast, Alfred Kahn died. Kahn was known as "the father of airline deregulation." Working for the administration of Jimmy Carter in the late 1970's, he freed the industry of the tight regulation that made flying a glamorous - and expensive - luxury experience, with fares set at a level guaranteed to pay for it all. After Kahn, an airline could fly wherever it wanted, and set fares as low as it chose.

So the supply chain did its work, and air travel got cheaper. Much cheaper. Southwest Airlines $29.00 fares cheap. No longer the private preserve of the affluent, air travel was now accessible to all. Passenger loads exploded.  A new paradise.  Quit while you're ahead?  Not a chance.

To the supply chain, damned be he who cries, "Hold enough!"  It's obsession is to keep cutting, past the fat, down to the muscle.  The once reliably affluent airlines spun into decades of teetering on the precipice of bankruptcy, to a current end result of less service, nickel and dimeing for transporting bags, providing pillows and life preservers, and a "deregulated" passenger experience that in previous times was more properly referred to as steerage. But, hey, it's cheap!

I walked into a CVS today where the single cashier station was empty. Only several self-service counters remained. We've developed a loathing of our own species. Faithful sheep, we've bought into Big Corporate's premise that the kind of cheap prices that allow us to buy all the stuff through which we now define our being can only be ours through a devil's bargain in which we agree to be treated as interchangeable cattle and treat our fellow workers as barnacles, to be scraped off. Our identity has been reduced to a standardized series of data fields and a record of purchasing behavior. Our credentials - our papers - are our Facebook profile. No human intervention required. and when people who, only yesterday, provided us service disappear, we ask no questions.

Is it any wonder, in such an environment, that Newark Mayor Corey Booker's Twitter feed surged to over a million followers as subscribers all across the nation followed his using tweets to personally respond to constituent snow removal problems and complaints, to the point of traveling through the city and helping shovel out cars.

In the last two issues of The New York Review of Books, the great British historian Tony Judt, who died of ALS this past August, has written an acute appreciation of the value and devaluing of rail travel. In The Glory of the Rails, he recounts a heroic tale of how completely the development of railroads changed everything about how we lived. Unlike canals and waterways, they were the first mode of travel fabricated entirely by man. To lay the rails, they changed the landscape and re-ordered the face of cities. The entire concept of time we accept without a second thought did not exist before the railroads, which standardized time zones and made the regular consultation of clocks and watches a seminal human activity. Through their speed and reliability, they compressed time and multiplied human interaction. Unlike today's random sprawl of roads, their strict linearity aggregated and channeled energies along clear lines.

Nowhere more than here.  The very existence of Chicago is a product of the railroads. Lines to both east and west converged on the city, making it the nation's transfer point for both passengers and freight. The sleeping cars of the Chicago's Pullman Company transformed rail travel from a dirty, smelly, family-unfriendly ordeal to a transport that became not just comfortable, but an expression of human pleasure.

At their peak, Chicago's six major rail terminals handled hundreds of inter-city trains every day, and millions of passengers every year. The 17 lines that converged on the city formed a powerhouse industry, flush with cash, with Microsoft-level profit margins of 40%, largely paid out in dividends to stockholders. 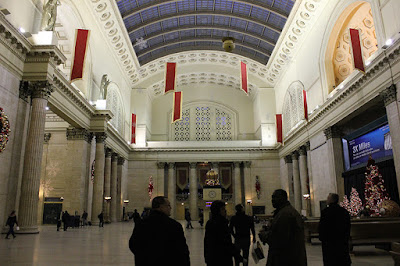 It was an optimistic era of explosive economic growth.  Each of those terminals were grand civic monuments.  Their architecture helped define the city. With their rich appointments and often soaring interiors, they were part decompression chambers, part secular temples.

But power led the railroads to become greedy and stupid.  Ultimately, they were blind-sided by the advent of air travel, and the development of the Interstate Highway System for freight.  One by one, once mighty companies bought a few last moments of survival by selling off of their real estate.  In the 1960's and 70's, Chicago's great terminals, derelict and voided of passengers,  were thoughtlessly and systemically destroyed. Today only the shell of Dearborn Station, gutted to a generic interior, and the great waiting room of Union Station survive.  And the good jobs disappeared as well.  As Judt relates:


. . . a large city terminus employed well over one thousand people directly; at its peak Penn Station in New York employed three thousand people, including 355 porters or “redcaps.” The hotel built above or adjacent to the station and owned by the railway company employed hundreds more. Within its halls and under the arches supporting its tracks the railway provided copious additional commercial space.

Today's airports entail a similar ecosystem, but with fewer workers, and often with lower, non-unionized wages.

Today, corporate consolidations continue across all sectors of our economy.  A shrinking number of corporations grow larger and more dominant, obsessed with making everything a supply chain commodity.  The supreme commandment to ruthlessly drive down costs is almost always predicated on cutting employees, paying them less, and passing off more and more of the expense of operations onto customers as self-service.

Jobs are destroyed and paychecks reduced with our compliance.  We shop in warehouses instead of stores. We bag our own groceries.  We pump our own gas. We willingly become our own phone operators, burrowing our way through time-consuming layers of automated responses and computer-simulated voices.  We'll research and book our own flights on-line. We'll wait in lines for hours, as in the old Soviet Union. We'll agree to be snarled at by customer support, if they agree to talk to us at all. Because it's cheap.

Recent news reports indicate that, despite often soaring profits, Corporate America has now begun to disassociate itself from the country's unemployment crisis, and now prefers to create jobs overseas. Because it's cheap.

The American economy is in its Dutch auction phase. We've apparently bought into the bill of goods that an ever smaller workforce and ever lower wages will somehow produce the kind of robust purchasing power required for a healthy, growing economy, not just for the rich, but for everyone.  But it doesn't, and it won't.  If you don't believe me, ask Andy Grove.

Along with Alfred Kahn, another death was revealed on Wednesday. Fashion model Isabelle Caro passed away November 17 at the tragically young age of 28. She had long battled anorexia, and was known for fashion shoots in which her bones were shown clearly protruding from her body. By the time she participated in a No Anorexia campaign she weighed, she told reporters, 59 pounds.