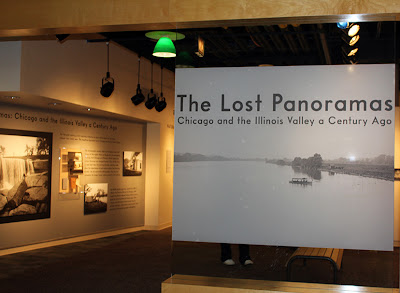 Nearly a decade ago, veteran Chicago author Michael Williams, looking for vintage photographs of Rogers Park, got permission from the Metropolitan Water Reclamation District to serve their archives.

What he found was slightly staggering:  25,000 6 by 8 inch glass plate negatives taken by the district's photographers.  As recounted by the Trib's William Mullen,  the photos were taken from 1894 on during the epic project to reverse the flow of the Chicago River through the construction of the 11-mile-long Sanitary and Ship Canal, linking the river to the Des Plaines, on its way to the Mississippi.  The photographs were to serve a practical purpose, creating visual documentation that would refute farmers' lawsuits claiming that the canal had made their land unproductive.

Williams, along with long-time co-author Richard Cahan, didn't get around to studying the collection in depth until fairly recently, and it was then they discovered that many of the shots had been made side-to-side, allowing them to be re-assembled into panoramas of Chicago and its farthest reaches at the turn of the 20th Century.

A sampling of those spectacular images make up The Lost Panoramas, a Snapshot Into Chicago's Past, an exhibition at the Peggy Notebaert Museum, which has now been extended through March 13th.  Those panoramas are, indeed, spectacular, but for a chronic urbanist like myself, what's even more fascinating are the photographs of Chicago at the time of its greatest vibrancy.  There are shots that remind us that us recently as the 1920's neighborhoods like Albany Park were still almost semi-rural, as well as a number of depictions of the industrial use of the waterways, including a striking shot of a riverfront lumber yard, the wood piled into tall towers, with two offset stacks reminding you of nothing less than Lucien Lagrange's unrealized twin-towered design, XO.

Cahan and Williams' CityFiles Press is planning to publish a book of the Lost Panorama photographs in 2011, and you can get a preview of what they're thinking of when they offer up an exhibition gallery talk at the Notebaert, tomorrow, Wednesday, December 29th, from 11:30 a.m. to 12:30.  It's free with admission to the museum, which is at 2430 North Cannon Drive,  in Lincoln Park, just off Fullerton.  And you can check out the butterflies, too.

Thanks for posting this. I had not heard about it/ Albany Park is close to my neck of the woods, so I'm eager to see those photos in particular. Happy new year and thanks for a great year of your blog.