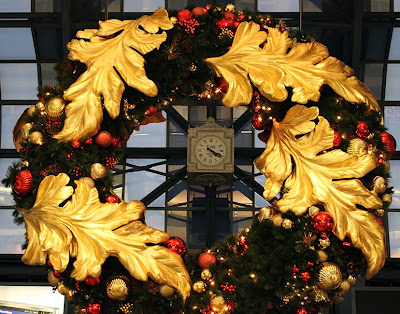 click for larger view
Yes, we're finally going to get around to our annual collection of holiday shots from around Chicago, mostly downtown.  We hope to have a page up tomorrow linking to all of our Christmas posts from 2006 to 2009, and then on Thursday have the 2010 photo's.  For now, here's a sample from the Ogilvie Station. 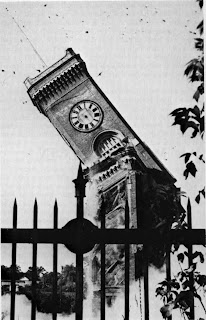 Incidentally, the Elgin National Watch Company, manufacturers of the clock pictured above, salvaged from Cobb & Frost's 1911 Chicago and Northwestern Terminal, was another Chicago area corporate powerhouse lost long ago to the dustbin of history. It was incorporated in 1864 and staffed largely by people lured away from an eastern competitor.  And just to show that corporate shakedowns didn't start with TIF's, the company refused to establish itself in Elgin, Illinois until the city promised them 35 acres of free land and $25,000.  The last watch movement in what once was the world's largest watch manufacturing plant rolled off the assembly line in 1968.  The half-million square-foot factory was demolished.  In a 1915 advertisement, Elgin promoted it's 143 foot-high clock tower, where the company . . .


maintained an observatory where two astronomers of great ability verify the rating of the Master Elgin Clocks by which all Elgin Watches are regulated.  Every clear night in the year they make eleven checks of the earth's rotation against twelve stars so remote that their gigantic orbits are imperceptible.  From the average of these 132 observations true star time is calculated.  In turn, this is translated into commercial time.  This absolute precision has given the Elgin standard of accuracy its great fame.

The tower was toppled in 1966.   Today, it lends its name to the Clock Tower Plaza Shopping Center, just down the river from the Grand Victoria Casino.