It's the second week of the month - time to add another half-dozen great items to the January Calendar of Chicago Architectural Events.

Saturday the 29th at UIC, 750 South Halsted, it's time again for  Future City Competition™ Regional Finals.  Now in its 19th year, this great program matches up area middle school students with engineer mentors to design cities of tomorrow, using SimCity, which they then have to translate into table-top scale models. The winners move on to the finals during National Engineers Week in Washington in February, where the top prize includes a trip to Space Camp.  (Last year, the competition's winning team also made a trip to the White House to meet President Barack Obama)

This Thursday, January 13th, sees two new events. At 6:00 p.m., at the Columbia College's Museum of Contemporary Photography, Northwestern's Krista Thompson will be in conversation with South Africa born photographer Guy Tillim, whose new exhibition at the museum, Avenue Patrice Lumumba, explores the "architecture and infrastruture of colonial and postcolonial Africa."

Also at 6:00 at Unity Temple in Oak Park, Jack Lesniak will be providing a virtual pre-restoration tour of the Frank Lloyd Wright Home and Studio as it existed in 1974, after a series of remodelings had seen it broken up into apartments.  Next Tuesday, the 18th, Architecture for Humanity Chicago will be holding it's 2nd Annual Holiday Hangover Fundraiser at the Steelcase showroom at the Mart, while on Thursday the 27th the Chicago Botanic Garden and Bartlett Tree exports will be sponsoring a day-long symposium, Sustainable Site Development: Trends, Challenges & Innovations. 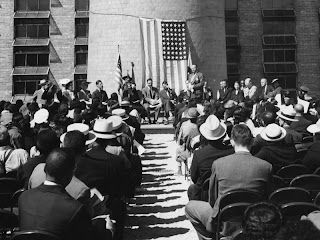 There are nearly three dozen great events still to come in January, including tonight's  Mayoral Forum on Public Housing in Chicago, 5:00 to 7:00 p.m. at the Cultural Center.  Check them all out at the January calendar here.