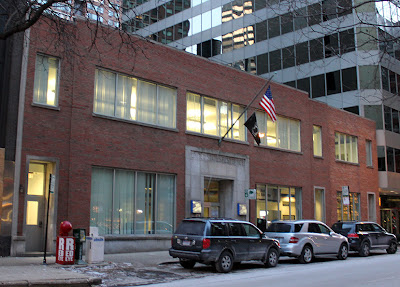 click images for larger view
When it opened - I'm guessing sometime in the 1940's - the clean-lined, brick building at 227 East was a United States Post Office.  It said so, in chiseled letters, just above the door. 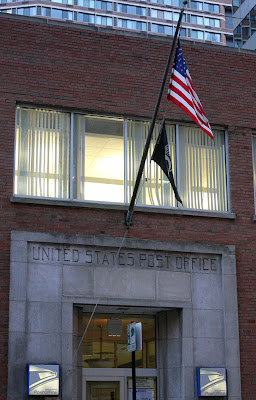 Somewhere along the way as our supply chain culture evolved, it became the Ontario Street Postal Store.  Now the lettering is the only thing left.  Relocated to the Streeter 1 and 2 residential towers at 355 East Ohio, it's been reborn as the Streeterville Postal Store . . . 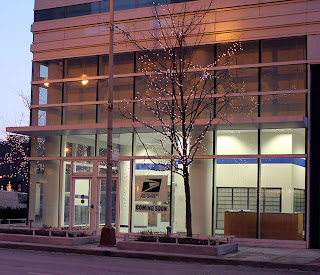 . . . all white and bright, with the obligatory all-glass corner with the huge column just inches behind it.  The walls of rented postal boxes get the pride of place along the windows.

On Ontario, the entrance was central, the soffit was trimmed with post office colors, and the counter area generously proportioned . .  . 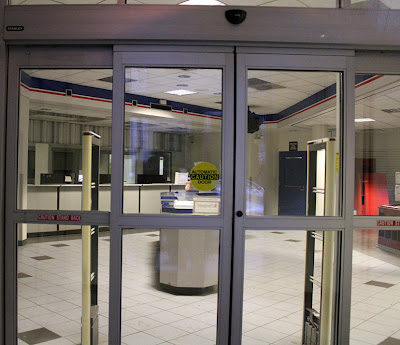 At the new location at The Streeter, the entrance is pushed off onto a side street, and the clerks' counter is squeezed into a pinched room that has the look of a branch of a bank that expects it's about to be shut down by regulators . . . 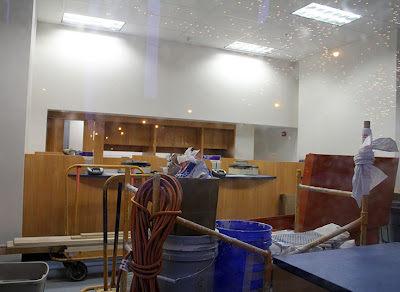 Post Office architecture used to be expected to have a certain dignity; at its best, a deliberate majesty, befitting a time when government wasn't a dirty word, and the whole enterprise was run by a "Postmaster General" - Benjamin Franklin was the first - who was actually a member of the President's cabinet.

Today, of course, like everything else, it's all about selling, and cheaply.  Why bother designing anything that's not numbingly generic when the whole operation seems to be lurching towards the terminal buggy whip end of the supply chain?  It'll be so much cheaper to convert it to a cell phone store or a Seagram's Medical Marijuana outlet when the inevitable transpires.

I have no idea what's going to happen to the old Post Office on Ontario, but it's a good bet it'll follow the kind of deformation in store for the rehabbed bakery and townhouses at 237 East that was the original home of the Museum of Contemporary Art. 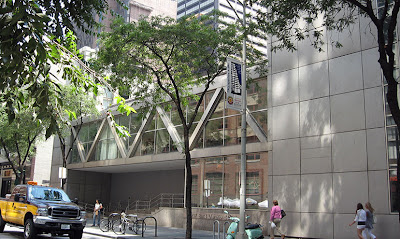 It's empty again, and the landlords have helpfully had floor plans and renderings drawn up to show how easily it can morph into its next role as still another fast food Valhalla. 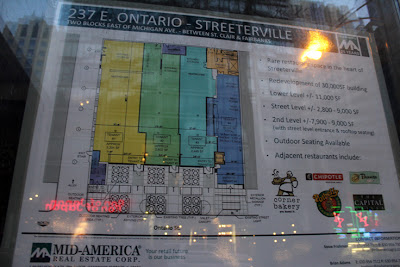 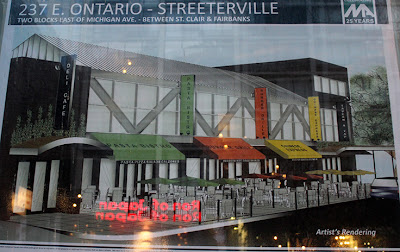 The mansion housing Les Nomades is among the last remnants of an era when East Ontario was one of Chicago's more elegant addresses.  It's been changing for quite some time now, and I have to admit one of my favorite buildings is the small black tower with concrete mesh sides and all-glass front at 226.  Just looking at it, you can pretty guess that the upstairs tenant was once a video store that proudly proclaimed its wide selection of porn.   With its cluttered signage, windows bordered in green light, and neon martini glass, complete with olive,  226 is the perfect combination of faded modernist elegance and honky tonk.  And it seems to have become the model the rest of Ontario Street is intent on catching up with. 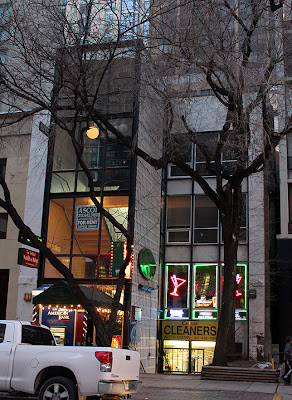 Only steps from the new Post Office - sorry, Postal Store - stands the man the whole district was named after: Cap Streeter, in the the person of a new, eight-foot-high bronze sculpture by Dennis Downes.  The former Mississippi riverboat captain contemplates what's become of the handiwork that he began in 1886 when he ran his steamboat aground on a sand bar about where the Hancock Center is now.  For the next thirty years, as the area around him continued to fill with sand and rubble, he sold deeds to property in what he declared the independent "District of Lake Michigan." Having spent the bulk of his life in pitched battle with the fat-cat developers, I'm sure he's calculating in his head what his share should be from the soaring condo towers that have arisen all around him.  And probably thinking that his little dog deserves a piece of the action, too. 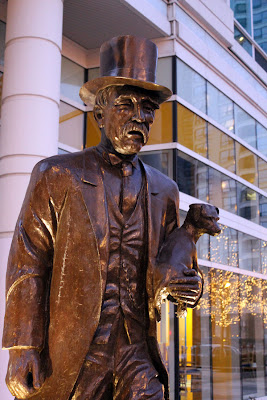 Remeber when Ontario was closed off for Bastille Day? If I remember correctly, there was a George Badonsky-owned French restaurant on the street, but I can't recall the name of it. Ontario was also once the scene for gallery openings on Friday nights.